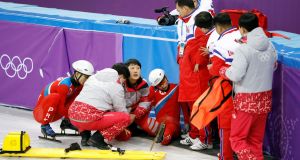 A couple dozen South Korean reporters bumped and jostled one another while trying to keep up with Ryom Tae-ok and Kim Ju-sik, the Olympic figure skating pair from North Korea, as they racewalked toward the exits after a practice at the Gangneung Ice Arena on Saturday afternoon.

Questions were shouted by the scrum.

“How was the practice?”

“How are you feeling?”

There were no answers.

“Do you want to stop and talk?” James Cowley, an Olympics official wrangling the news media at the arena, asked Kim in English. It was unclear whether Kim heard or understood the question, but he kept walking, a big smile on his face.

For the past three days, after the North Korean athletes arrived with the heavy expectations that their participation here in these Winter Games would tone down tension on the Korean Peninsula, this cat-and-mouse game has played out. South Korean journalists have trailed them everywhere.

It has injected a dose of commotion to a normally quiet period before the start of competition.

South Korean journalists have trained high-powered lenses on the North Korean delegation. Local reporters have shuttled from one training session to another, clamouring for soundbites that never materialise. And the mixed zone – the area inside competition venues where journalists can interview athletes – has become a theatre of the absurd, one that reporters, competitors and organisers are still trying to figure out.

Early on Saturday, the North Koreans’ silence in the mixed zone was broken, finally, when Kim Hyon-son, the skaters’ coach, called out, “I’m happy we have been welcomed this way!”

And then she and her skaters were gone. The entire interaction lasted less than a minute. The reporters dispersed, shaking their heads.

Over 40 members of the news media – as well as a couple of dozen local volunteers – had shown up to watch Kim and Ryom practise on Saturday morning, and a similar number showed up for the pair’s second practice six hours later.

Things could change over the coming days as athletes and journalists from other countries arrive, but for now the North Koreans have dominated the early Olympic news cycle.

Some in South Korea have been less than pleased. Last month, Hong Joon-pyo, the leader of the conservative opposition Liberty Korea Party, warned that the Pyeongchang Olympics were becoming the Pyongyang Olympics, a cheeky play on the similar sounding name of the North Korean capital, which has already caused confusion.

North Korea cancelled a cultural event it had planned in South Korea a few days before the opening ceremony on Friday, blaming what it called “insulting” news media coverage in South Korea.

But the fascination has hardly ebbed.

The appearance of North Korean flags at the athletes’ village on Thursday and Friday – a rare sight in South Korea, where such displays would normally be illegal – created a couple of days of news. And then there were the reports on Saturday that more than 150,000 people had entered a lottery for tickets to a pair of performances next week by a 140-member North Korean art troupe.

The zeal with which the local press has pursued the North Korean visitors could be seen on late Friday at the skating rink, where the short-track speedskaters Choe Un-song and Jong Kwang-bom were working out alongside skaters from France, Italy and Latvia.

When the North Korean skaters and their coach huddled along the railing to talk, a dozen reporters crept as close as possible to observe the interactions and snap pictures. Minutes later, when the North Koreans regrouped farther down the rink, the pack sidled that way, too. On they went this way, like moths to a flame.

Things became hectic midway through the session after Choe lost his footing around a turn and crashed into the perimeter padding with a thud.

As soon as it became clear that Choe was not getting up, the journalists swarmed to get as close to him as possible and jostled for position. Choe was carried away on a stretcher, and the reporters dashed to the mixed zone.

As one could have expected, though, Jong and Yun Chol, the pair’s coach, walked through without saying a word or acknowledging the horde of reporters skipping along beside them.

Afterward, an Olympic staff member could be overheard explaining to her colleagues that she had needed to cajole the North Koreans to walk through the mixed zone, which all athletes are required to do at the Olympics. She said she had reminded them that they did not need to say anything, tracing her thumb and index fingers along her lips, pretending to zip them up.

On Saturday night, another chaotic, moving mass formed after Ryom and Kim, the figure skaters, finished their evening workout. More benign questions, more awkward silences. Kim marched through, sweat glistening on his face, and did not utter a word.

But the reporters kept at it, and their persistence was rewarded, albeit in a small way, when Ryom responded to a question about how she felt. “Good,” she said, without breaking her stride before disappearing once again through the exit doors. That was it, and again, the South Korean reporters turned and slunk away, mostly empty-handed. – New York Times