Hockey: Ireland finish 5 Nations on a high note with win over USA 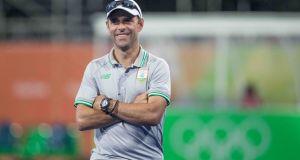 Craig Fulton and his Irish men’s team returned home to Ireland reasonably content with their week’s work in Malaga, beating World Cup opponents Canada as well as Scotland and USA with something to spare.

They did come a cropper against higher-ranked Spain 3-2 to a late goal but, with new faces like Sam O’Connor and Luke Madeley getting game time, it was a satisfactory start to preparations for November’s World Cup.

The intensity will ramp up further in the coming month with the prestigious Sultan Azlan Shah tournament in Malaysia on the agenda with world number ones Australia and Olympic champions Argentina among the opposition.

In Malaga, Ireland closed out their campaign with a 4-2 win over the USA. Jonny McKee got the first with a very sharp pick from mid-air after Peter Caruth’s slap-shot was saved his way.

Caruth showed an opportunist’s instinct to slap in the second late in the third quarter and Neal Glassey stretched out a 3-0 lead a minute later following a simple move down the left wing, using the space created by an American sin-binning.

Aki Kaeppeler pulled one back for the US before Alan Sothern made it 4-1 with five minutes left. Sean Cicchi got a consolation goal at the death.

For Ireland, a number of experienced heads may well add to this panel for the Azlan Shah event. Goalkeeper David Harte is certain to come back in following his recent stint in the Far East in the Malaysian Hockey League.

He finds out on Monday evening if he is the FIH World Goalkeeper of the Year for a third successive year. Harte is the only goalkeeper to ever win the award twice, marking him out as one of the sport’s all-time greats.

John Jackson, Mitch Darling, Ronan Gormley and Kirk Shimmins are other Olympians who missed the Malaga trip but remain in contention for selection.