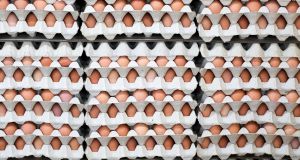 The Norwegian team can expect a varied diet.

Egg sandwiches. Bacon and eggs. Egg salad. Eggs on toast. Scrambled eggs, or fried. After taking receipt of 15,000 eggs instead of the 1,500 they wanted, Norway’s team at this month’s Pyeongchang Winter Olympics may have a pretty limited menu.

Norwegian chef de mission Tore Ovrebo struggled to suggest what they will do with the delivery, but did not rule out consuming them. Their registered 121-strong delegation of athletes and officials would get plenty of protein, eating 124 eggs each.

“The eggs was more like a misunderstanding than something that we needed, so it was an extra zero on the order, so 1,500 to 15,000,” he said with a rueful laugh. “They will probably use them I guess and I don’t know, maybe the people that supplied us with them will take them back I don’t know. It’s not a big issue.”

Ovrebo said it was important to enjoy the Games as well as scramble for medals. “The aim is to have fun, and be as good friends when we go back as when we came here. In the meantime we are hoping for 30 medals.”

While friendship is the aim, it isn’t always possible in the fiercely competitive world of Olympic sports. After all, you can’t make an omelette without cracking eggs.

Tonga send a team of one

Having eschewed movie offers and modelling contracts after a telegenic appearance at the Rio Olympics, Tongan taekwondo fighter Pita Taufatofua will compete as a cross-country skier at Pyeongchang, a reinvention worthy of a Hollywood script.

The Australia-born 34-year-old had never seen snow until two years ago but will become just the second athlete from the balmy Pacific nation to qualify for a Winter Games.

Taufatofua had to battle through four Olympic cycles to become Tonga’s first Olympic taekwondo competitor at Rio, so making it to Pyeongchang was a doddle by comparison.

“It still feels quite strange actually being here because it took me 20 years to get to Rio, (and) just one year to get here,” the former youth worker explained at the athletes’ village on Thursday. “But, you know, it’s just an honour. I mean, how many countries in the Pacific get to go to a Winter Games?”

The image of Taufatofua - oiled up, shirtless and wearing a traditional Tongan skirt at the head of the country’s tiny delegation at Rio’s Maracana stadium - went viral on social media, thrusting him into minor celebrity. He’s unlikely to wear a similar outfit in Pyeongchang’s sub zero temperatures.

Iran has summoned South Korea's ambassador over media reports that Iranians at the Pyeongchang 2018 Olympic Winter Games would not receive the latest Samsung mobile phone given as a gift that most other athletes have received.

The reports said 4,000 of the latest $1,100 Samsung smartphones were being given to athletes attending the Winter Games, but athletes from Iran and North Korea would be excluded because of sanctions against the two countries.

Iranian Foreign Ministry spokesman Bahram Qasemi, quoted by the state news agency IRNA, said the South Korean envoy was told that "if Samsung does not apologise for its unwise action, this will greatly affect Samsung's trade relations with the Islamic Republic of Iran".

Samsung said it had no comment on the report as the International Olympics Committee (IOC) was responsible for distributing gifts at the Olympics.

The IOC declined to comment. Pyeongchang Winter Olympics organisers also said the responsibility for handing out the phones lay with the IOC.

Tough international sanctions including travel restrictions and a ban on the sale of luxury goods and sports gear have complicated South Korean Olympic organisers' efforts to provide their northern neighbours with the same benefits available to other Olympians.

Any colour you want, so long as it’s black

The pistes of Pyeongchang may be blinding white with snow as the Winter Olympics kicks off in South Korea, but among the ice rinks and bobsleigh tracks stands something completely different: the darkest building on the planet.

Lurking between the competition venues like an angular black hole, it looks like a portal to a parallel universe, waiting to suck unsuspecting ski fans into its vortex. But this is not the latest high-tech defence against North Korean attack. It’s a temporary pavilion for car giant Hyundai, designed by British architect Asif Khan, using a material developed in Surrey.

Described as the world’s largest continuous “nanostructure”, the building has been sprayed with a coating of Vantablack Vbx2 , a super-black material that absorbs 99 per cent of the light that hits its surface, creating the illusion of a void.

If these Games go off without a hitch this month, organisers will not be alone in toasting success. Their insurers will also be celebrating a tidy profit.

The Games are being staged about two hours’ drive from one of the world’s most heavily militarised borders, in a host country that is technically at war with its neighbour and with teams that include two nations - the United States and North Korea -- which have swapped nuclear threats.

There are also concerns among Olympic organisers and sponsors that the Games could become a target of cyber hacking, a threat that could disrupt competition in the event of a major cyber attack.

The International Olympic Committee (IOC) takes out protection for around $800 million at each Games, which covers the vast majority of the roughly $1 billion investment it makes in each of the host cities.

The policy will pay out for a range of mishaps, ranging up to declarations of war, actual war, or acts of war. The IOC declined to reveal the premium it has paid for the Pyeongchang, but insurers said it was likely to be around 2-3 percent of the total cover. At the IOC’s coverage of about $800 million, this would represent a cost of around $16-24 million.

North Korea’s Winter Olympics delegation were swamped by media as they attended their welcome ceremony at the Athletes’ Village in Gangneung. Ten North Korean athletes are due to compete at the Games, including 17 athletes, seven of whom will participate as part of a unified Korean women’s ice hockey team.

The North Koreans, who were accompanied by members of their so-called Cheerleading Squad, shrugged off some early inhibitions to interact with South Korean dancers at the ceremony.

Earlier, North Korea confirmed that the sister of leader Kim Jong-un, Kim Yo-jong, will become the nation’s highest-ranked official to visit the South when she attends the opening ceremony. US and senior North Korean officials, meanwhile, say they have no intention of meeting each other at the Games - even though vice-president Mike Pence and Kim will be seated just metres apart at the opening ceremony.