Dublin Horse Show: Ireland gets off to victorious start 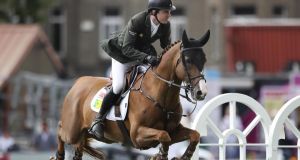 Greg Broderick on Zuidam wins the Speed Stakes at the 2017 Horse Show at the RDS. Photograph: Lorraine O’Sullivan/INPHO

Ireland had the perfect start to the international jumping action in the Main Arena at this year’s Dublin Horse Show when winning both classes up for decision on Wednesday.

Over 40 of the 73 starters recorded clear rounds over the 1.45m track but, in what is generally regarded as a familiarisation round, only three riders broke the 60-second barrier, Broderick who was home on Zuidam in 58.94, the USA’s Lillie Keenan on Be Gentle (59.68) and Co Offaly-born Darragh Kenny with Chakito (59.79).

The afternoon’s Sport Ireland Classic, a 1.60m jump-off class, was a more competitive affair. Eighteen combinations qualified for the second round but Lillie Keenan and Laura Kraut withdrew Super Sox and Whitney respectively leaving Beezie Madden as the only representative of the USA to compete against the clock. Her luck ran out in the second round where Coach lowered two fences.

Six riders recorded double clears and hopefully it will be a good omen for later in the week as the three fastest were recorded by Irish internationals.

Last to go in the jump-off round, England-based Tipperary native Shane Breen took the first-place prize money when he came home in 41.83 on the nine-year-old Belgian Warmblood stallion Ipswich van de Wolfsakker. Over from his yard in Germany, Co Wexford-born Bertram Allen slotted into second with Izzy By Picobello (41.92) with Co Waterford’s Anthony Condon, another living in England, filling third place following his round in 42.13 on Balzac.

Small and young event horses will occupy the Main Arena on Thursday morning, competing over a mixture of show jumps and cross-country type fences, with the first international show jumping class, the Clayton Hotel Ballsbridge Speed Derby, scheduled for 13.25. The Anglesea Serpentine Speed Stakes is due to start at 15.30.

The grey is by Barker’s own Gortfree Hero who was champion ID stallion at the RDS in 2010 and 2014 and is back at the Dublin 4 showgrounds for a final bid at the title. Gortfree Lakeside Lad was produced for Barker by Brian Murphy and Pat Loughlin at the latter’s Gowran Hunt Horses yard in Co Kilkenny.

The reserve champion, Silver Foggy Dew, a 2012 gelding by Carrickcottage Star, also came from the four- and five-year-old class. This grey was ridden in the first two qualifiers by his Co Meath owner Marie Helene Finegan but qualified for Dublin under Vicky Teuton who was on board Silver Foggy Dew on Wednesday.

The early afternoon action in Ring 2 was devoted to performance Connemaras and the winner of the Berney Bros Saddlery class for animals aged five to seven was Killaneen Boy which was ridden for his Co Wicklow owner Lucinda Kelly by Diarmuid Ryan. This dun stallion by Western Boy was bred in Co Sligo by Steven O’Beirne.

During the qualifying period leading up to the show, Graiguenamanagh veterinary surgeon Ryan was one of the busiest competitors and his dedication paid off here as he also finished second on board Charlotte Glynn’s six-year-old Castleside Carrig gelding Carrig’s Island Lad.

Numerous members of the O’Connor family from Inch in Co Wexford were on hand to celebrate the success in the class for Connemaras aged eight to 15 of Agharanny Minstrel. The 10-year-old grey stallion by Castleside JJ was ridden for Noreen O’Connor by her daughter Edwina.