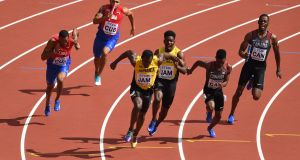 Usain Bolt started the final countdown to his retirement by guiding Jamaica through to the 4x100m relay final at the World Championships.

The eight-time Olympic champion anchored the squad to victory in the second heat at the London Stadium on Saturday morning.

Jamaica finished in 37.95 seconds — slower than Great Britain and the USA from the first heat — but will be expected to challenge for the podium in Saturday evening’s final — Bolt’s last race of his career.

“For me it’s hard to be sad because of the energy I am getting from the crowd, I just feel happy and blessed,” Bolt said in a trackside interview.

“It’s been brilliant, the energy in the stadium is outstanding. I knew it was going to be like this, I appreciate you guys coming out and supporting not just me but the whole World Championships.”

Great Britain — with Danny Talbot, Adam Gemili, Nethaneel Mitchell-Blake and CJ Ujah — qualified second behind the USA in 37.76secs in the first heat with Talbot hunting a medal.

“Definitely, that’s what we focus on, that’s what we want to do. It’s a great time to do it in front of a home crowd so hopefully we can do it this evening,” he told the crowd during a trackside interview.

The women’s squad of Dina Asher-Smith, Asha Philip, Desiree Henry and Daryll Neita qualified in a season’s best of 41.93 seconds by finishing second, also behind the USA.

Philip said: “We definitely embraced the opportunity. None of us competed here in 2012 so to have this crowd is breathtaking. They really carry you around over every changeover.”

Sir Mo Farah also runs one of his final races before track retirement and admitted his quest for double gold will be tough as he looks for the fairytale farewell.

The four-time Olympic champion goes for glory in the 5,000 metres at the London Stadium on Saturday evening.

Farah, who races at 8.20pm, is wary of the competition — which includes Kenyan-born American Paul Chelimo who came second behind him in the 5,000m at the Rio Olympics last year.

His 10,000m triumph last weekend remains Great Britain’s only medal of the championships but Farah insisted he is not guaranteed another victory.

“I want to leave on a high because that’s the perfect note. But it isn’t going to be easy in the 5k. It’s going to be tough for me. There are a lot more guys,” he said.

“There’s a lot more decisions to be made in a shorter race. In the 10k you’ve got 25 laps so you can relax a little bit if you’re further back to make that decision and work around.