Trevor Bayliss will not renew England contract in 2019 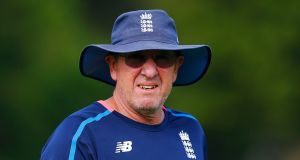 Trevor Bayliss has said he will not renew his contract as England coach when it expires in September 2019. Photograph: Jason O’Brien/PA

England coach Trevor Bayliss will walk away at the end of his contract in 2019 but has vowed to begin the job of building a team ready to win in Australia.

Bayliss insisted the 4-0 Ashes defeat, which was confirmed with this week’s crushing loss in Sydney, had no bearing on a decision that had long been made and it had never been his intention to stay longer.

Having started his tenure by winning the urn in England in 2015, he will sign off next September after another home Ashes contest for the English.

“I told Andrew Strauss (director of England cricket) probably 12 months ago that September 2019 is when I’m contracted to and that would see me out,” he said.

“I’ve never been anywhere any more than four or five years. Whether you’re going well or not I’ve always felt that round about that four-year mark is time to change. A new voice, a slightly different approach slightly reinvigorates things, so I passed that on to him 12 months ago.”

Announcing his plans shows admirable honesty from the plain-speaking 55-year-old but with English fans, players and administrators all desperate for an improved showing Down Under in four years’ time, it is also a brave step.

Put simply, many of the most important issues facing the national — over selection, style and even infrastructure — will be overseen by a man who will be gone before crunch time arrives.

It puts him in a position somewhat akin to second-term president, trying to institute initiatives he will not benefit from and which could be easily reversed by his successor.

If anything, that elevates Test skipper Joe Root’s importance even more, a fact Bayliss is happy to promote.

“I’ve got no problem working towards a long-term goal even if I’m not going to be there,” he said.

“You leave a coaching position hopefully with the team in a better place than when you started. Joe Root as the captain will still be there and there’s a base of six or seven players that will still be young and good enough to be in the team.

“The captain is in charge, but we’re there to help out. Joe is a young captain and I would expect in four years when he comes back, with another four years’ experience and an away Ashes under his belt, he’ll feel a lot more comfortable.”

The Test squad which travels to New Zealand next month is unlikely to show too many drastic changes, perhaps even just one change apiece in the batting and bowling ranks.

Reactions to Ashes’ defeats have certainly been more dramatic than that in the past but Bayliss accepts the side must evolve if it is to reach new levels.

That process will get under way sooner rather than later, but with a warning attached not to expect instant results.

“It’s not going to be an overnight success. If you bring three or four young blokes into the team it will be a slower process as they learn what the international game is about,” he said.

“It’s about slowly getting them involved, not necessarily in the team but around the squad to begin with and filtering them into the team when positions become available or when they force their way in.

“If it is to occur that we’re not necessarily as successful as we’d like to be because we’re blooding some young players it’s about being able to take it on the chin. Hopefully everybody realises we are heading in a certain direction.”