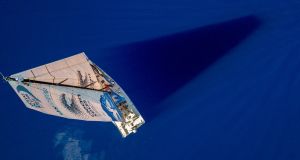 The Turn the Tide on Plastic photographed from a drone. Photograph: Brian Carlin/Volvo Ocean Race

What a difference a week makes! After starting out on the 6,000 nautical mile fourth leg of the Volvo Ocean Race from Melbourne to Hong Kong in strong winds and rough seas, we’re now totally becalmed and baking in 40 degrees of heat. We’re now back in the doldrums, about 800 miles east of Papua New Guinea, with still 3,500 nautical miles to the finish.

For the past 12 hours we’re officially ranked first overall out the seven boats, and the fact that we’re effectively level-pegging with the top boats is a reflection of our improved performance that has been steady since leaving Australia.

Our departure was hugely physical for the first three days as we were constantly gybing as we crossed the Bass Strait north of Tasmania with the wind behind us. The gybing manoeuvre means shifting tonnes of wet sails and other equipment from the old “high-side” of the boat to the other to help maximise weight distribution on board.

This is an “all-hands on deck” exercise that can take up to half an hour, and speed is of the essence so as to avoid losing ground on the other boats all doing the same.

As it takes so long to get into foul-weather gear before going on deck it was just easier to stay dressed and sleep fully-kitted in my bunk just to be ready for the next call. Sleep was a luxury for those first few days, but thankfully my initial bout of seasickness cleared after 24 hours so it could have been worse.

The first five days of the leg were particularly tough. The relentlessness of the action on deck meant getting 45 minutes’ rest at best in every four-hour “off-watch” period before going back on deck for four hours, and it really took a toll. I’m sure I cried a few times in my bunk before nodding off – I just couldn’t see light at the end of the tunnel.

But there have been some lighter moments as well. Firstly, I got stung by a jellyfish as it washed over our deck in a wave and landed on/in my shoe! I noticed it straight away, and nearly threw my shoe overboard trying to get it off. Luckily the stinging went away after a few hours, so I guess it wasn’t one of Australia’s more menacing species.

Another was while putting my wet-weather trousers on up in the bow and we dropped down a big wave. I lost my grip on the rail and backflipped across the boat. Luckily I landed all my weight on my left shin, although initially I thought I had broken my leg, but after a minute I was able to get back up and since, apart from it being a bit sore and swollen, it hasn’t caused me too much trouble.

Meanwhile, for 2018 I resolved to give up Nutella, but the once-a-day tortilla wrap stuffed with Nutella genuinely makes me happy, so I am not sure I will be able to stick to that resolution!

Once we were off the east coast of Australia our move out to sea paid off versus the boats that headed inshore, and we found ourselves close to the leaders as the fleet split apart by up to 80 miles at one point.

We made good gains on the overall leader Mapfre and then found Team Vestas, who appeared then disappeared again, as we all followed our best routing rather than covering one another.

In the first three stages of the race we seemed to be constantly in company with Team Scallywag, but they took the inshore routing, and have lagged in last place for several days now.

However, as the leading bunch all slowed down as we reached the windless doldrums region south of the Equator, the boats at the rear still carrying the breeze compressed on the front-runners, so we could be looking at a restart from this classic ocean racing “parking lot”.

As we’re closest to the theoretical fastest route to Hong Kong we’re listed in first overall, which is thrilling and a great boost to our confidence knowing at least that we’re competitive.

We can see five of the other boats, and are constantly taking their bearings with the hand compass: we’re all the same, becalmed and waiting for the first break and catch some breeze to get moving.

Still, we’re pretty happy even if we’re in zero knots of wind, so we’re trying everything to keep the boat going.

But as we’re only spread apart by about 10 miles and plenty of flukey winds still to cross, it could become a race to be “first out of gaol” and into the trade winds. But that’s still another day away.

Brian Carlin, our Irish onboard reporter, has been flying his drone high above the boat, and can see vast tracts of ocean deserted but for the fleet. By night the skies are a display of the Milky Way and a stunning starfield from horizon to horizon.

Meanwhile, we have to battle the intense heat that makes below decks like an oven with little or no ventilation, and on deck it is only a few degrees cooler.

As its light airs sailing, we’re trying to sail Turn the Tides On Plastics as much like a dinghy as possible so we’re sleeping and resting in the bow on the kitbags which is really uncomfortable apart from the heat.

We’ve rigged our very own Wendy House on the foredeck constructed from sailbags, sail-ties and a boathook that allows us to shelter from the sun while keeping the weight forward.

Standard dress despite the heat includes shorts, long-sleeve T-shirts and wide-brim hat plus sunnies and high-factor sun block. Shoes are also a must as the deck is too hot to walk on barefoot. The sea is 30 degrees, and while a swim might be tempting we are still in race mode.

And for once having wet clothes soaked in cooler water is pleasant for the 10 minutes or so before the heat dries out the fabric.

Still, life-important creature comforts are still with us, and my supply of chocolate is holding up well, though eating is more like pouring it out and hoping it doesn’t drip on the gear.

As for the coming week, within a few days we’ll be crossing the Equator for the second time in this 40,000 nautical mile race, and thankfully I won’t be facing King Neptune and his sidekick Queen Codfish to pay retribution for intruding into his domain.

By the time we get into the trade winds we should be passing to the east of New Ireland island as we start a long, deep-ocean stretch across Micronesia towards the Philippines, which should be quite a fast wet passage northwestwards towards the leg finish in Hong Kong.

The next week is likely to be crucial, but our goal of achieving leg podium results is more alive than ever: we’ve proven that we can overcome our initial early stage jitters and stay with the leaders, where we can and have challenged for the lead.

The next test will be matching the top teams boatspeed for boatspeed as the tactical route options narrow towards the finish.

We’re in the hunt, at the front, and relishing the prospect of getting moving – soon!