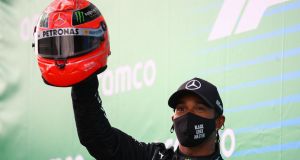 History is in the offing at Sunday’s Portuguese Grand Prix. Should Lewis Hamilton win, it will his 92nd Grand Prix victory, eclipsing Michael Schumacher’s tally which had been widely assumed to be unbeatable. It would make Hamilton F1’s most successful ever driver. Whether or not it makes him the best ever is another matter.

Statistics alone are never the sole criteria in coming to such conclusions. Nicky Butt won more medals than George Best and no one pretends he’s a Manchester United legend. Tony McCoy won over 1,500 more races than Ruby Walsh yet a sizeable majority would have the latter as a more complete rider.

Comparisons between jockeys and drivers are pertinent considering the vital element to their success is what they’re sitting on. It’s been speculated that driver skill is, at best, about 20 per cent of the package when it comes to crossing the line first, another element in how ‘GOAT’ debates may be fun but are futile in terms of a definitive conclusion.

None of which stops fans passionately engaging with them. The statistical element to the best-ever quandary in men’s tennis is currently concentrating minds too. Rafael Nadal joined Roger Federer on 20 grand slam titles at the recent French Open, beating Novak Djokovic who might yet trump his rivals in terms of numbers.

Considering his head to head record against both, Djokovic’s claims to already being the best ever have a logic that numerical superiority would only enhance. But such tots always fail to take into account other factors, including popular sentiment, an intangible that for all his accomplishments the Serb knows all too well he comes up short in.

There are obvious similarities with Hamilton. There’s something just that bit too mannered about the way both the English F1 driver and the Serb tennis player affect to not care about what people think of them. It suggests they realise only too well their reputations for being as divisive as they are dominant. And underneath everything both are clearly touchy about it.

How else to explain Hamilton’s flouncing response to Jackie Stewart’s comments when the former triple-world champion from the 1970s was asked recently for his opinion on the best drivers he’s seen.

The Scot praised Hamilton as the best right now. But hardly unreasonably he also pointed to how many more races now there are these days, and that sitting in the best car is even more important compared to when he was competing. Stewart nominated Juan Manuel Fangio as his top driver with Jim Clark, next best.

It’s hardly stop the presses stuff but Hamilton seems to have taken it personally, proclaiming that he gets knocked by so many people, particularly older drivers who he said have a ‘bee in their bonnet’ about him. He promised in 20 years time not to talk down to any young driver because, he suggested, with age comes a responsibility to encourage and shine as bright a light as possible.

It was an OTT response to what is ultimately a single slant, albeit one backed up by pedigree and profile, but ultimately still just one person’s opinion. Nostalgia might come with the years but 81-year-old Stewart is entitled to his perspective. He might even be forgiven a smile at Hamilton’s self-assurance about possessing such benevolence in future.

It was a hissy-fit that will only reinforce suspicion among the six-time world champion’s critics about confidence tipping over into conceit far too often for warmth and appreciation to be assumed. If that’s fair enough then the suspicion remains too that presumption on both sides fails to take in the wider picture.

If Hamilton is a polarising figure then it’s perhaps just one quirk of a personality that helps make him possibly the most overwhelmingly dominant figure in any major global sport right now. And like or dislike him the Englishman is at least an identifiable character, an important consideration with most other drivers seeming to have all the public personality of a gearbox.

For all that Hamilton rubs up so many people the wrong way with hard-sell profile building that helps make him Britain’s richest sportsperson, and isn’t averse to showing off the material benefits of such status, he is also prepared to put his head over the parapet and not stick to racing when it comes to expressing an opinion.

The self-awareness to realise the impact of what a black champion says about race in a mostly white business has been stamped all over his statements on the Black Lives matter movement. He has also been vocal about other matters close to his heart such as animal rights, the environment and veganism.

Some of those statements have flirted with triteness. Considering he is the face of a massive petrol-guzzling business traversing the globe throughout the year he is wide open to accusations of having his cake and eating it on the environment. Petulance of the sort he showed towards Stewart can seem more than a bit prattish.

But it would be a shame to allow that impinge on appreciation of a talent that statistics underline as very rare indeed. By the end of the year it’s all but certain Hamilton will have equalled Schumacher’s seven world titles. No one can claim for certain to know the merits of different champions across the generations. But Hamilton’s claims for a place in any GOAT conversation are already inarguable.

From an inexpert point of view his career to date suggests a symbiosis of the two other great talents from recent decades. Unerring accuracy on the track smacks of Schumacher’s famed cold calculation. Outbursts off it resonate of the emotional volatility that propelled Senna. The sum total is an important figure and a true champion whose numbers are set to be unique.

That isn’t the be all and end all when it comes to subjective and unavailing debates on the best ever. But they are unambiguous evidence of excellence.