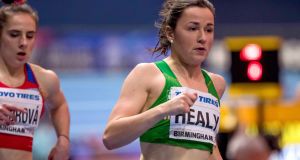 There is no stopping or slowing Phil Healy. For the third time in four days, the Cork athlete improved her personal best over the 200 metres and 400 metres, after also setting a new Irish record in the 100 metres.

Competing at the Geneva International meeting in Switzerland, the 23-year-old from Cork first clocked 52.19 when finishing second in the 400m, improving the 52.63 she ran in Santry on Wednesday night, 35 minutes after running the Irish record of 11.28 for the 100m.

She followed that with another new best of 23.17 for the 200m, which moves her to number three of the Irish all-time list, with a real threat of breaking that record too.

Healy now has qualifying times over all three distances for the European Athletics Championships in Berlin in August.

“A great day in Geneva rounds off what has been a super few days, thanks to everyone for their support over the last week,” she said.

Also qualifying for Berlin over 10,000m was Stephen Scullion, the Belfast runner clocking 28:36.05 at the Portland Track Festival. Scullion also has the qualifying time in the marathon after his 12th place finish in London in April, clocking 2:15.55.

In her final track race at Villanova, Síofra Cléirigh Büttner ran 2:05.73 to finish a close fourth at the American collegiate NCAA championships in Eugene, Oregon.