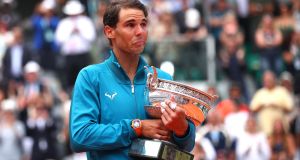 The tears were new but otherwise things were as they always seem to be in Paris. Rafael Nadal duly collected his 11th French Open title here on Sunday with a brutal, brilliant, resilient and ruthless performance, just as he had done 10 times before. But as Nadal’s uncle, Toni Nadal, said shortly afterwards, “this is not normal”.

Less than an hour after the match was completed, demolition workers began to smash up Court Philippe Chatrier, part of the continuing redevelopment that will lead to a roof being in place over the stadium court in two years’ time. This, though, is Nadal’s court, the place he has dominated like no other. His emotions were on show as he shed a few tears when the national anthem of Spain was played in his honour for the 11th time, an obvious sign of what this tournament means to him. Nadal’s 11th title takes his grand slam tally to 17 and even at 32, despite the miles in his legs, who is going to stop him making it 12 in a year’s time?

When he was recovering from injury this year, for the umpteenth time in his career, he was focused on this title and nothing – certainly not Dominic Thiem – was going to stand in his way. Even a cramp in his left hand early in the third set, which required a rub-down of his left forearm, did not stop him as he closed out for victory.

Uncle Toni, no longer his nephew’s coach but back in his customary seat on the end of the players’ box, two seats down from the current coach, Carlos Moya, summed it up perfectly. “When someone wins 11 times here, for me it’s unbelievable,” he told reporters. “To think that Rafael has won 11 times, it’s unbelievable. I think he is really good.”

The understatement was classic Toni but there was nothing understated about Nadal himself. It was his best performance of the fortnight, as Nadal confirmed on court, just when he needed it most.

Right from the start of the tournament the Nadal camp knew Thiem was the biggest danger, having seen at first hand what the Austrian can do when he defeated their man in Madrid last month. Having also beaten him in Rome last year, he is the only man to defeat Nadal on clay in the past two years, and the way he had played on the way to the final threatened to make it a classic match.

That it was not was testimony to Nadal’s level, which never wavered, despite everything Thiem threw at him. Nadal threw himself across the baseline, retrieving everything. When he had the chance, he thumped his forehand with his customary effect, his dazzling footwork still a marvel even as he enters his 33rd year.

The momentary cramp in his left hand gave him a brief scare but he was simply too good, yet again. He is now three grand slam titles short of Roger Federer, the pair having shared the past six slam titles between them. Might he catch him? “I want to think that is possible but I know maybe in a month Federer will win Wimbledon again. I don’t know,” Toni Nadal said.

It is eight years since Nadal last lifted the Wimbledon title and he has not been past the last 16 since he reached the 2011 final. The transition from clay to grass is a tough one for him, the loading required particularly difficult for his chronic knees, which nevertheless have held up amazingly well over the years.

Last year, he looked good only to lose against Gilles Müller of Luxembourg in a five-set match. It is a tough assignment but with the confidence earned here it is possible. “I think so,” Toni Nadal said. “I thought last year he could win. I thought it, because he played really good, but in the end Gilles Müller just played too good.”