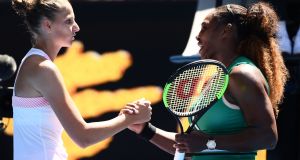 Serena Williams, her movement cramped late in the match by a rolled ankle, blew a third-set 5-1 lead, four match points, a rematch with Naomi Osaka and a chance to equal the 24 slam titles of Margaret Court in a dramatic quarter-final on Wednesday.

Karolina Pliskova remained calm as Williams disintegrated physically after her left ankle collapsed under her during a foot-fault when in sight of victory, and went on to win 6-4, 4-6, 7-5. On Thursday, she plays Osaka – Williams’s conqueror in the US Open final – after the exciting young Japanese player had accounted for the Ukrainian sixth seed Elina Svitolina 6-4, 6-1 in just an hour and 12 minutes in the opening match on Rod Laver Arena.

“I think she improved her game in the second set, went for her shots,” Pliskova said courtside. “I got a little tight, played too passive. But I’m standing here as the winner, so I’m happy. My mind was in the locker room at 5-1 down in the third. I didn’t have many chances. She got a little bit shakey in the end and I took my chances. I’ll be ready for tomorrow. We’ve played a few times. She’s had some great times since the US Open.”

Williams’s coach Patrick Mouratoglou said beforehand he thought she was playing her best tennis since coming back from childbirth – but that wasn’t the overall impression in the first hour on another hot day.

Pliskova, who’d made just three unforced errors when beating Garbine Muguruza in the fourth round, was similarly economical in her risk-taking here and won the first set behind a clinical serve, at 81 per cent efficiency, making just five unforced mistakes.

The Czech grabbed two break points in the fifth game of the second set, and Williams netted a backhand from the baseline to send a quiver of concern through her team. A set and a break down, she was suffering under the quality pressure of an opponent whose one win over her in three encounters was in a slam, when Pliskova won their quarter-final at the 2016 US Open in straight sets. Only four other players had beaten Williams twice or more in slams: her sister, Venus, Angelique Kerber, Garbine Muguruza and Sam Stosur.

Williams wasn’t quite finished, and broke back to love. Pliskova, so cool so far, had to hold to prevent Williams taking it into a third set but, in a drawn-out exchange, three aces were not enough to get her there, Williams pushing her through deuce four times before forcing a final limp backhand from her.

“I feel she’s back to being Serena on both the physical and emotional side,” Mouratoglou had said earlier. When she broke early in the third, all seemed well again. By the time she had wrecked the Pliskova serve to go 5-1 up, the contest had all but dissolved. That’s when everything changed dramatically.

Williams foot-faulted on match point, rolling her left ankle in the process. She double-faulted to hand Pliskova a chance to break back and dumped a forehand. Pliskova rediscovered her serving mojo to stay in the tournament, and broke to love for 4-5.

Frustrated and angry, Williams hit hard from the back of the court but Pliskova saved two match points and held for 5-all with a withering forehand past her static target. When Pliskova broke to love, the result was on her racket. Williams saved two of three match points, but netted her final forehand and an extraordinary piece of tennis theatre was done.

There was no such drama for Osaka – apart from interrupting the on-court TV interviewer, informing him, “I know it’s going to be tough no matter who I play... and honestly, I’m just trying to go inside, because it’s a little bit hot right now.”

It was on a par with her knock-down honesty at the start of the tournament, when she disarmed her audience by revealing, “Honestly, I don’t really know where I’m going when I talk. There’s not really a set plan. It just goes like this, all over the place.”

She’s going nowhere just yet, and will be centre stage again on Thursday – just not against the opponent she had anticipated. – Guardian service