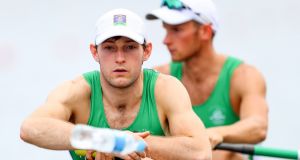 Even as many of the top rowers in the country line up at the Irish Indoor Championships (IIRC) in the University of Limerick on Saturday, Gary O’Donovan has chosen a different challenge.

The Skibbereen man, who has just turned 26, has relocated to New Zealand, and will spend the next two-and-a-half months training and competing there and in Australia.

He intends to row in the New Zealand Rowing Championships (February 19th to 23rd) and is also in the frame for the Sydney International Regatta, which includes the Australian Open, at the end of March.

Gary and his younger brother, Paul O’Donovan (24) built a long trip to Australasia into the 2018 programme which culminated in a gold medal performance at the World Championships in the lightweight double sculls.

Paul is studying medicine in UCC and will compete in Limerick. His studies may leave him unavailable for the European Championships at the end of May/early June. This could open the way open for Gary to prove himself in the lightweight single.

Indoor events sometimes draw criticism because competing on an ergometers does not mimic – or even, necessarily, improve – rowing technique.

But Joe Cantillon, the IIRC organiser and a rowing coach himself, takes the point head on.

“Indoor rowing is a component of training, like weights., The championships can be a motivation for training,” he says.

Top rowers tend to do enormous amounts of it.

The public gets to see world gold medallists in action and up close. Even if they are seeing “extreme training” it boosts the profile and interest in rowing. And it can be done at times of the year when on-the-water work, in Ireland at least, is limited.

The numbers for Saturday’s event are impressive: there are 1,350 entries. Racing over 2,000 metres is back as the main choice of many competitors. Some internationals may be missing, but even with ergometers which are new to them, the big names are generally worth watching. And there is sometimes a surprise or two.

The entry for the Dambuster head of the river on Saturday, January 26th, consists of 129 crews from 13 clubs. It is not a huge event on recent trends, but Carlow Rowing Club are happy to have such a good spread of participants from Leinster and beyond – Queen’s University have entered women’s and men’s crews – for an inaugural event. Last year, the weather forced a cancellation.

Elsewhere, Rowing Ireland are looking for an innovation officer (marketing and communications). The sport could do with drawing in more sponsorship revenues on the back of its bigger competitor base and spectacular international success.