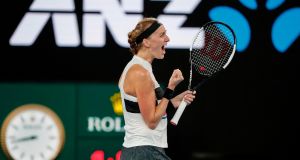 Sentiment counts for little in sport but what there is left in Melbourne this week will be split in the semi-finals between a Grand Slam winner, Petra Kvitova, and Danielle Collins, a 25-year-old American who had dreams of being a lawyer and has defied all expectations except her own.

The 28-year-old Kvitova, one of the nicest people in tennis, is in her first semi-final here in seven years, after killing Bambi – the hometown favourite, Ashleigh Barty – 6-1, 6-4.

Collins’s has been a different fairytale at the first Grand Slam tournament of the year. The feisty outsider with a nice line in on-court sledging looked very much at home at this level as she grumbled and rumbled for most of the two-and-a-quarter hours it took her to crush the other remaining unseeded aspirant, Anastasia Pavlyuchenkova, 2-6, 7-5, 6-1.

Kvitova, the two-time Wimbledon champion, should win and go on to the final. She is back to near her best a little over two years since she survived a knife attack by a burglar in her home town in the Czech Republic. After surgery and rehab, she rattled off five titles in 2018 to get back into the top five and she will return there next week.

Kvitova took Barty to another place. From the start she was sharp and dangerous, breaking serve within seven minutes. The world number six said later: “I always wanted to come back and play at the highest level. I can compete with the best, play the Grand Slams, be very deep in the Slams. It’s happening.”

The Czech broke down in tears immediately after her win, and said later: “Yeah, it just took me a bit to tears – but happy tears, for sure.”

Collins, who was three points away from defeat in the first round, and a year ago failed to get out of the first round of qualifying, has performed heroically.

“This has all been a really incredible experience,” she said. “This time last year I was playing a Challenger in Newport Beach. I’m really embracing it. But I’m playing really good tennis. I’ve put in a lot of hard work.”

Of her dreadful start on day eight she said: “Even though the [first] set was 6-2, it took an hour. I felt like it was very close, regardless of the score.”

Collins is aware of the buzz building around her. “The support has been incredible. There’s been so many nice things that people have said.”

As for her dramatically higher profile, she said: “I embrace all of this attention that I’ve been getting. It’s been really nice that people have recognised my success. It’s very flattering. Hopefully I can continue to get some good energy.”

It should not be a problem. Collins, who took two years out after joining the tour to complete a media studies degree, seems more grounded than most players hurled into the spotlight from obscurity.

As for her strong showing on Tuesday, she said: “We both look to take the ball early. She came out in the first set and, quite frankly, the last couple matches, I was in positions where I was controlling from the get-go.

“The second set, I don’t think I was playing totally freely. I was trying to extend the points, make it more physical. There were some tight situations. So that made it even more challenging. She was playing really great tennis.

She will need all that self-belief in the semi-final against Kvitova, who was superb against Barty, the most popular woman in Australian sport.

Collins said: “We had a really great battle a couple weeks ago, one of the best matches I’ve played – and I didn’t even win. She’s an incredible champion, has gone through a lot.”

Kvitova has waited a long time to get back to near the top of the mountain. It is hard to see her slipping in sight of at least a good grab at the prize.

This is her 11th visit to Melbourne, her 10th time in the main draw. She has gone out in the first round four times, in the second round three times, in the third round once. She battled into the semi-finals in 2012, only to lose in three sets to Maria Sharapova. She is in the mood to stop the rot. – Guardian