Older, faster, stronger: How to improve in the pool with age 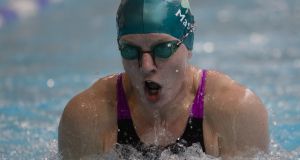 Anyone who thinks competitive sport is only for young people, should look at swimming says Charlotte Reid. Named open water swimmer of the year for 2018, the 39-year-old says her career is taking off at a time in life when others are looking to the sofa.

Reid competes at elite level in both open water and pool races, has won European medals in masters swimming and regularly represents Ireland on the world stage in both types of swimming.

“I always swam but not at a particularly high level when I was younger, I kept at it,” says Reid. “I’m still getting faster now which is quite unusual. You see women of 90 or 95 swimming up and down, it’s just phenomenal to see, they’re on the block and putting in decent times. They’re very competitive.”

Masters swimming is open to anyone aged 25 and upwards. The first category is 25-29, and she says this can be quite serious with many ex-Olympians taking part.

Swimming competitively for about six years, Reid’s most recent outing in the pool was the 2018 European masters championships.

“In masters there is only one heat, you just swim once. It’s all based on times, so you give it one shot, you just have one chance to do it. Otherwise if you went through all the age-groups, you would be there all day. So you are seeded in your age group. You can’t hide your age in swimming, it’s no secret.

And it seems the competitive edge never leaves people; it’s common for swimmers to train harder on entering a new age category to maximise their chances of winning a medal.

“The good thing for me is I age up next year. It’s the opposite to being a kid where the older you are the better, but in masters swimming the younger you are in the band the better. Next year I’ll be 40 against 44-year-olds so I’ll have the advantage.”

Swimsuits must be approved by Fina (the international swimming federation) so they don’t give an unfair advantage. Reid has some suits she feels are faster than others: “I’ve one old pair I keep around and wear from time to time to see if there’s still magic in them.”

It was an unusual experience, you had people in their 60s doing the Macarena in swimsuits

Each swimsuit might only be worn for a handful of races before it becomes too loose for racing. It can take up to 30 minutes to pull on her suit with fellow swimmers or trainers roped in for extra traction. It’s one way to bond by asking someone to haul your straps up over your shoulders in the changing room.

But if that all sounds too serious, then picture a tent full of swimmers doing the Macarena to keep warm during a rain-break at the Europeans.

“Some of us were up for it, it was quite painful to be honest, but some people were getting into it,” Reid says. “It was lashing rain. I could see three of the Russian swimmers near me, they were not having any of it. It was an unusual experience, you had people in their 60s doing the Macarena in swimsuits.”

Things like this bring people together in spite of language barriers, with swimmers swapping hats rather than shirts as happens in football.

Racing in pools and the open water means Reid trains all year-round. This poses both time and financial challenges.

She says 2018 went much better than expected, but as a masters level swimmer her success isn’t recognised outside of the swimming world. And not just her success, she points to the high number of Irish masters swimmers regularly in the world top 10 rankings.

“The attention goes to athletes who are 18-22 and targeting the Olympics. All of what we do is self-financed; you’re paying all your training fees, all your travel costs and things like that. Swim Ireland will host a few sessions before a gala and we’ll get hats and T-shirts but in terms of anything else, it’s all pay for it yourself.”

A teacher at Coláiste Íde in Finglas, Reid says this helps juggle work and competition. She trains at the National Aquatic Centre in Blanchardstown and the ALSAA sports centre near the airport. She goes after work, skipping the 6am starts in favour of swimming with friends who help keep the motivation going.

In Ireland we’d be swimming in 15 or 16 degrees which according to Fina guidelines we should be wearing wetsuits, but we’re all tougher than that

And luckily the school summer holidays coincide with the open water season.

“I probably prefer the pool, it’s not as cold. We don’t wear wetsuits for open water races, we wear normal swimsuits. In Ireland we’d be swimming in 15 or 16 degrees which according to Fina guidelines we should be wearing wetsuits, but we’re all tougher than that.”

Open water races can take place in lakes, rivers, the sea or water channels at any distance up to 10km. After 10km it’s a marathon. Fina rules don’t offer much solace for anyone trying to stay warm – only approved swimsuit, goggles, a maximum of two caps, a nose clip and earplugs can be worn.

One of Reid’s favourite races is the Liffey Swim – she’s done five.

“You do end up tasting the water, and swallowing it, it’s just part of it,” she says. “If you have something alcoholic at the end of it to warm up, you’ll be fine. You’re tasting salt water from the fourth or fifth bridge, it’s fine. That’s the main race at the end of the year that everyone wants to race in and do well in. You hear of people who’ve done 20 or even 40 of them.”

The weather is a key difference between the two types of swimming, with Reid saying wearing two tracksuits and jackets just before you dive in to the sea is common although the 2018 season was much warmer.

“You have to strip off in the cold to get in, and then you’re getting dressed in the lashing rain after. It’s a challenge, that’s why we do it, the competitive aspect to it. You’re going off a handicap, I’d normally be one of the last to go so you’re trying to catch as many people as you can and not finish last. Sometimes they can be a bit lonely, those swims.”

And while she focuses more on pool swimming, she claimed eighth at the Europeans in the 3km open water race, second in the Lee Swim and won the Kilkenny Swim so maybe it was not such a surprise Swim Ireland awarded her open water swimmer of the year.

“I was able to do nearly all the swims this year, it’s nice to be recognised. There are 1,100 people registered just for the Leinster Open Sea, you could have 200 women at a normal race. There are huge numbers, it’s a massively growing sport.

“I hope I can keep going, hopefully when I’m 85 I’ll still be swimming and racing.”