16th seeds eases past Canadian in straight sets, Halep to play Venus in third round 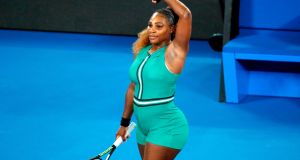 Serena Williams eased to victory over Eugenie Bouchard to reach the third round of the Australian Open while Simona Halep survived another scare to join her.

Williams is the 16th seed but very much the title favourite, and this performance only reinforced that status as she eased to a 6-2 6-2 victory.

There were perhaps a few more errors than Williams would have liked but also 20 winners and some devastating play, particularly in taking apart the Bouchard serve.

Standing next in the 23-time grand slam champion’s way is 18-year-old Ukrainian Dayana Yastremska, who upset 23rd seed Carla Suarez Navarro to reach the third round of a slam for the first time.

Having survived a first-round test against her US Open conqueror Kaia Kanepi, Halep looked to be finding things more comfortable against young American Sofia Kenin as she moved a set and 3-0 ahead.

But 20-year-old Kenin, who won her maiden WTA Tour title in Hobart last weekend, fought back to take the second set and led 4-2 in the third only for Halep to win the final four games and the match 6-3 6-7 (5) 6-4.

Speaking on court, the world number one said: “I have no idea how I won tonight.”

It does not get any easier for Halep, who is nursing a leg muscle problem and next faces Venus Williams. The American also came through a three-setter, defeating France’s Alize Cornet 6-3 4-6 6-0.

Halep said: “She’s a great player, a champion. It’s always a big challenge for me to face the sisters. So we will see how I will play, how I’m going to be on court. But I will be confident because I played against her, I know how she plays. I have to be strong.”

US Open champion Naomi Osaka was coy about a slight injury scare after calling the trainer during her 6-2 6-4 victory over Tamara Zidansek.

The fourth seed, who next faces the tricky Hsieh Su-wei, said: “I was able to finish and win the match, so it’s not that big of a deal. It’s something that I have to keep an eye on. I’m not telling you, though.”

Elina Svitolina was in her comfort zone in moving through to the third round — but less so when her relationship with fellow player Gael Monfils was made public.

Monfils was spotted in Svitolina’s player box during her 6-4 6-1 victory over Viktoria Kuzmova in the second round, leading to an awkward moment when she was asked about it during her on-court interview.

“I didn’t really expect to be asked that because I just finished my match,” said the sixth-seeded Ukrainian. “We are here for tennis so that’s why it was a bit strange.”

Svitolina, who previously dated England cricketer Reece Topley, added of the relationship: “He’s there for me, he’s supporting me, and I’m there for him as well. He understands, I understand, what we’re going through. It’s great.”

For all the talk of the unpredictability of the women’s game, the story of the tournament so far has been the top players dominating, and it was the same on Thursday.

Suarez Navarro was the only seed to fall, with the likes of Karolina Pliskova, Madison Keys and Elise Mertens all moving through to the last 32.