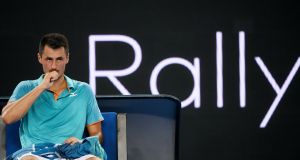 Bernard Tomic has denied claims made by fellow Australian player Lleyton Hewitt that he tried to blackmail him and threaten his family. Photo: Lukas Coch/EPA

Bernard Tomic has denied he has ever threatened Lleyton Hewitt’s family as Australia’s ugly tennis feud continues to escalate, with Tomic on Friday hitting back at the Davis Cup captain’s sensational claims of blackmail and physical threats coming from his one-time Cup spearhead.

“I have never threatened his family,” Tomic told News Corp Australia. “Nice, Lleyton. To think how low of a person you actually [are] and [it’s] why the Australian public never liked you. I got nothing to do with your family and I don’t care what’s wrong with you, you liar.”

Tomic was responding to Hewitt’s return serve on Thursday night after Tomic sparked the war of words with a vicious verbal attack on the former world No 1 following his first-round Australian Open loss on Monday.

Speaking after his Australian Open doubles exit, Hewitt said Tomic would never play Davis Cup again on his watch and that he had cut all contact with Tomic following the alleged abuse during the past 18 months.

Hewitt said he tried to help Tomic – who this week criticised Hewitt’s Davis Cup and Open wildcard player selection policy – but believed the 26-year-old former Australian No 1 was now a lost cause.

Hewitt said he had received multiple threats from Tomic. “The threats that I’ve received for me and my family that I’ve had for a year and a half now, I don’t think anyone would reach out to a person who speaks like that.

“For me, it was the abuse I copped from him at the end. I drew a line in the sand and I haven’t spoken to him since. He won’t play Davis Cup while I have anything to do with it.”

Hewitt said he did not feel threatened by Tomic’s abuse but was frustrated after trying to help the former world No 17, who has now dropped to 88 in the rankings. Hewitt said he was disappointed by Tomic’s most recent comments. “For me, the biggest frustration is that I really went out of my way to help him,” Hewitt said.

“I spent a lot of time with him at a lot of tournaments and tried to get a coaching structure and physical team around him to give him the best opportunity but at the end of the day he kept making the wrong mistakes. Deep down, Bernie knows what I’ve done for him ... for Bernie to come out and have a go, but more, to get all of his facts wrong, that’s probably the most disappointing thing.”

Australia’s qualifying tie next month in Adelaide is against Bosnia and Herzegovina and Nick Kyrgios is also unlikely to play a role due to his sliding ranking and his attitude. With players such as Australian No 1 Alex de Minaur, John Millman and exciting teen Alexei Popyrin on the rise, Hewitt said he did not need players who would not give their all for their country.

Hewitt said Kyrgios was not lost to the Davis Cup cause but needed to match the cultural standards set by the team. He said he had not spoken to Kyrgios about attitude and his controversial comments on social media.

“Nick still has a lot to learn,” he said. “The biggest thing Rochey [Cup coach Tony Roche] and I have is to set cultural standards and I feel Nick isn’t meeting those. The things we feel like we have to push – all we ask is to commit to the sport, go out there and give 100 per cent every time you step on the court.” – Guardian service