‘Celebrating the body in all its forms’: Reflecting on ESPN The Body 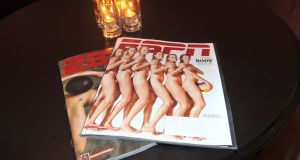 ESPN The Body issue came to an end in 2019. Photo: Getty Images

Behind the camera is obviously the weirdest place to be. You see things, lots of things. But at the same time, you’ve to remain anonymous, unseen, clicking away. One element of photography that I had an interest in was a very famous magazine called ESPN The Body. The magazine had a very distinct touch in showcasing athletes’ bodies nude, but in a very posed and majestic way that wasn’t distasteful. In short, the idea was to highlight athletes’ bodies, how they vary in shape and size and skin colour, to how every sport has its own unique shape. One person behind the scenes, directing and staging it, was Nancy Weisman, a photography editor.

“My role was to come up with ideas, produce the shoot, be on set, direct the athletes in collaboration with the photographer. Once the shoot is done, and the photographer sends me the images, then I would edit, pick out my favourite images. Then show it off to the boss, the creative director and my direct boss. Then the selections begin”, explains Weisman over Zoom.

So, Weisman was a sought after photo-editor, but her job entailed so much. “For ESPN, as a photo editor, in my role, I would come up with ideas. The editors would gather a list of athletes that we want to choose for the issue. Then I was given my assignments. Depending on who the athlete was, what their strengths were, what their body was, what movements they did, it was always collaborative. We would come up with ideas to best showcase their body with being strategically covered. We wanted to show as much body as we could being tastefully done and strategically covered.

“My role was to come up with ideas to find the right photographers for the right athlete. A lot of it really helps when you have the right connection of photographer. Not just style of shooting, but often their personality. I would do that and I would produce the shoot. I would hire a photographer, set designers, makeup, all that stuff. Produce it or hire a producer to help me produce it. Make sure everybody gets to where they need to be. Then once I get on set, it’s sort of like, I wore many different hats. Every photo editor is very different in how they approach their job. I’m very hands-on, and I love interacting with the athletes”.

Added to her role was counsellor/hype woman for every athlete who felt nervous. Weisman recalls how she had to sometimes coax athletes out of their robes and hype them up. “First of all, every athlete is different. Some men were very uncomfortable, while some women were very comfortable in reverse. You never knew, it just all depends on who it was. I remember one photoshoot with Nigel Sylvester. He’s a BMX rider guy. He was so nervous. He didn’t want to take off his robe and inside pants.

“‘I don’t think I can take off my robe. I’m so nervous,’ he said. Then he requested some Hennessy to drink. Sometimes athletes would request a little bit of alcohol. Yes, I very much enjoyed trying to make people feel comfortable, because at first, of course, you’re super nervous, you’re in front of not just me, but the photographer, their assistants. We would often try to have a close-set. There’s still a lot of eyes on these folks. Yes, it would take some comforting and assuring them. Once they start going and getting it done, then they forget they’re naked. Everybody else does as well. Yes, I wore many hats”.

All of this may not have even happened. As the story goes, The Body Issue were adamant if this was to take off, it needed a big star who was willing to bare all. So, at the ESPY Awards, Serena Williams was approached by a rep from ESPN who politely requested she features on the magazine. She only had one response “would I be on the front cover?”

Serena Williams, like in everything she does in life, paved the way for over 11 years of glorious, glossy catalogue memorabilia that will go down as some of the most respected and most insightful pieces of print journalism. It took a while, but it was hard at the beginning.

“At the beginning, it was underwear optional. The second issue, I think it was if you want to be in it, you’ve got to take your clothes off. At first, yes, there were some nos, I’m sure. The editors would make the ask to Tom Brady or whomever. There were plenty of nos, but as we build trust and as the magazine gained respect and saw what we were doing, then athletes would contact us that wanted to be in it, so it got easier”.

The Body Issue prided itself on diversity. Not only was that racial, it meant size, ability, gender and sport. Weisman, while into sports and into photography, was, every year without fail, mesmerised by what these athletes did to maintain such a physique. “That’s one thing that we would pride ourselves on, was making sure we had all different body types. Because it is surprising. I was always surprised by sometimes seeing muscles that I didn’t know even existed. Other times, it was somebody that maybe wasn’t so muscular and butch. Still, the body of an athlete takes on all shapes and sizes. I was always so mesmerised. I love the human form and I love the athletic form. I love what the athletes are capable of doing. It’s a dance. It’s so elegant and not. It’s poetic and rough.”

Weisman breaks into a fit of laughter. “I was more surprised, to be honest, by, to be frank, like the size of some of their privates”.

So did the labels and connotations surrounding nudity change after ESPN printed The Body Issue? Weisman reflects back on her time. “Nudity has a stigma. Which is silly because, especially for athletes, this is their instrument, this is what they do. They’re nude in front of their teammates all the time. It’s no big thing. To be able to show a nude body tastefully done, of athletes, I was very proud of that, very proud to bring that to the world and to maybe get people to relax a bit. It’s okay, we’ve all got a body and they’re all shapes and sizes. Some people don’t have limbs and some people have very, very long fingers or the strangest things and the body, it’s just what’s on the outside of us. Let’s not shy away from expressing and showing it and celebrating the body in all its forms”.