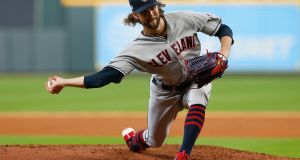 Adam Cimber pitches for the Cleveland Indians during a game against the Houston Astros in 2018. Photograph: Tim Warner/Getty

Cleveland’s baseball team will drop “Indians” from their name, according to multiple reports, in a move US President Donald Trump dismissed as “cancel culture at work”.

Native American groups and some sections of the team’s fanbase have argued the name is racially insensitive for years. The move, which was first reported by the New York Times and later confirmed by ESPN, is likely to be formally announced in the coming days. Washington’s NFL team decided to stop using a name considered a slur towards Native Americans earlier this year and are now known simply as the Washington Football Team. Cleveland may follow a similar convention while the team decide on a new name.

The New York Times reports that Cleveland will continue with their present name for the 2021 season before cutting “Indians” in 2022. The team dropped their Chief Wahoo logo, the grinning, red-faced caricature used since 1947, from their uniforms in 2018 after decades of complaints that it was racist.

But Trump failed to see the racial link and tweeted: “Oh no! What is going on? This is not good news, even for ‘Indians’. Cancel culture at work!”

In July, the team said they were considering changing their name in the wake of the police killing of George Floyd, which sparked a widespread debate about racism in America. “We are committed to making a positive impact in our community and embrace our responsibility to advance social justice and equality. Our organization fully recognizes our team name is among the most visible ways in which we connect with the community,” the team said in a July statement. The team’s manager, Terry Francona, has said he believes it is time to “move forward” from the name.

Cleveland were known as the Lake Shores, Bluebirds, Broncos and Naps before settling on their current nickname in 1915.

Three other major league teams who use Native American names, MLB’s Atlanta Braves, the NFL’s Kansas City Chiefs and the NHL’s Chicago Blackhawks have no plans to change their branding. The latter team say they have no intention of changing their name as it honors a historical figure, Black Hawk, who was a prominent figure in Illinois history.

Dozens of college and high schools teams are named after Native American tribes in their local areas. In 2005 college sports’ governing body, the NCAA, looked into the use of Native American names. Some teams stopped using Native American names and iconography that were deemed offensive, but others who received approval from local tribes continued to do so.

Perhaps the most famous example is the Florida State Seminoles. The tribe’s council approved the use of the name as well as other traditions involved with FSU’s teams. – Guardian