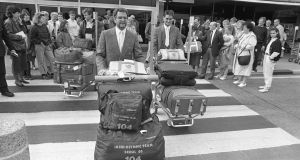 George Gibney arrives home with the Irish swimming team after the 1988 Olympics in Seoul. Photo: Independent News and Media/Getty Images

There is a moment in episode nine of Where is George Gibney? – the BBC Sounds and Second Captains podcast tracing the story of the paedophile former Irish national swim coach – which turns the blood cold.

It’s told by Fiona Bennett, who contacted Mark Horgan and Ciarán Cassidy, the creators and presenters of the podcast, after listening to the episodes which began to air in August. She was abused by Gibney after he was appointed as ‘baths manager’ of the newly established Waterford Crystal swimming club in 1971.

While a significant number of swimmers coached as children by Gibney in Dublin have spoken of their experiences, Fiona Bennett was the first voice from Waterford.

She describes his modus operandi all those years ago; the rush of early encouragement, the befriending of parents; the dinners at her house and then the abuses. She is 10-years-old and suitably innocent and unable to fully comprehend what he is doing to her. Then her family moves to Galway.

When the Gibney story is laid out like this, in riveting, upsetting half-hour audio narratives with first-hand accounts, it’s hard to fathom how he got away with it

She may have been able to use the resilience of childhood to push Gibney to the margins of her imagination and get on with things. She kept swimming. But Gibney, using his friendship with her family, turns up not only in Galway but in her home. He is downstairs having dinner while she is in her bedroom, asleep: the listener imagines it to be a school night.

And the diabolical arrogance and cunning and evil it took for Gibney to do what he did then; leaving his hosts, making his way to the child’s bedroom and lying on top of her. Fiona Bennett has an easy-going, friendly voice and she delivers this horror story in an un-dramatic way. She never told a soul.

“And here I am 60 now and your podcast comes out. And I would love to see him pay the price,” she tells Horgan before finally cracking as she says that she also decided to do speak for the sake of her daughters.

“Because I would hate if anything like that ever happened to them. I’d kill the person. I would. I’d be up for murder.”

She articulates the emotion that many of Gibney’s victims must have felt in the decades since he fled the country in 1993, somehow eking out a subterranean existence across the United States, always managing to stay one step ahead of the ghastly truth of himself.

When the Gibney story is laid out like this, in riveting, upsetting half-hour audio narratives with first-hand accounts, it’s hard to fathom how he got away with it. There was nothing covert about him: he seemed to exult in his power to abuse with impunity, much like Jimmy Savile in the BBC.

But will he pay that price? In the weeks between the airing of episodes eight and nine, some 18 people have come forward with new allegations. There is a sense, for those of us listening in, of the many people Gibney abused as children gathering force and new momentum.

There’s always a danger with true-life podcasts, particularly those involving crime, that the listener begins to forget that these are stories of real lives: that it becomes little more than a gripping narrative; a thriller.

Gibney was allowed to shed his skin, to walk away from his disgraced reputation in Ireland and live a shadow life

Where Is George Gibney? avoids this because the producers don’t disguise the fact that their research and interviewing is harrowing and exhausting; even the segments when they track Gibney down in Florida and confront him sound heavy with foreboding rather than exciting or climactic. Horgan’s palpable anxiety at confronting Gibney could easily have been edited but it’s included.

Much of the Gibney story has been covered before and is detailed in the podcast. Johnny Watterson of this parish led the contemporary reporting, publishing the allegations in the Sunday Tribune despite catastrophic libel potential and later alerting swimming clubs in both Scotland and the US to Gibney’s past, causing him to be fired from his coaching positions. Paul Kimmage, Justine McCarthy and the US investigative journalist Irvin Muchnik have continued to report on Gibney, periodically reminding the public of the fact that he was still out there.

But hearing the spoken testimonies on the podcast, often recorded in their own homes, after so many years and broadcast week after week through the late pandemic summer, airing terrible memories sometimes nearly 40 years after they last saw Gibney, has served to merge those individual voices into an extraordinarily powerful chorus. As the podcast deepened, it became apparent that Horgan and Cassidy had performed a public service.

It’s obvious from listening that Gibney didn’t simply abuse those children, he also abused, in many cases, the absolute faith of and good nature of their parents, who welcomed him into their lives as a guiding figure for their children. It’s clear also that the Irish state catastrophically failed those children.

They were unfortunate to grow up during a time when adult authority was absolute and unquestioned. Several wonder aloud how or why they didn’t speak up - Fiona Bennett says she was disappointed in herself. But to whom would they have spoken and how would they have found the words?

And even after swimmers Gary O’Toole and Chalkie White initiated the complaints that led to the criminal investigation into Gibney, the group was let down again. The high court decision not to proceed with a court case may have been technically correct in the narrow legal sphere but given the new revelations and allegations, it is hard to square it with any rational sense of justice.

Gibney was allowed to shed his skin, to walk away from his disgraced reputation in Ireland and live a shadow life. After a quarter of a century, he may have convinced himself that he was scot-free; that the children had grown up, grown older and grown tired. But there must be a fresh impetus to have Gibney extradited and made answerable to those allegations.

Even if that does not happen, you can’t help but feel that the tables have turned and that wherever Gibney lies awake at night now, he fears them coming for him.