Aryn McClure’s Irish adventure could come to a winning end 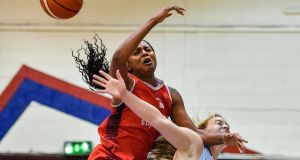 Having grown up in the New York borough of Queens, where she attended Archbishop Molloy High School, Aryn McClure was hardly a stranger to all things Irish. “The school was 75 per cent Irish, my best friend’s Dad owned an Irish bar in Queens, lots of my friends came from Irish backgrounds, and I grew up on shepherd’s pie, corned beef and cabbage,” she laughs.

Ireland, she reckoned, wouldn’t be an entirely strange land, then, but still, the nerves were jangling more than a little when she boarded her flight for Dublin at JFK last September to mark the start of her adventure.

From Dublin she travelled to Belfast, home of the Sport Changes Life foundation, which offers scholarships to gifted young sports people, and brings them to Ireland to further their studies and their sporting careers.

When she completed her degree in Public Relations and Media Studies at Quinnipiac University in Connecticut, where she starred for the basketball team, McClure, 22, signed up with the foundation’s Victory Scholar Program, which brought her to Ireland to play this season with Cork’s Singleton SuperValu Brunell, while also doing a Masters in International Business at the Cork Institute of Technology.

It was during her short stay in Belfast, before she set off for Cork, that McClure began to sense that the world was a whole lot smaller than she had previously assumed. “The move was nerve-wracking. I wasn’t used to being away from family for months and months, but it was funny – it was the day I went to see the Belfast Peace Wall that I kind of realised we all have so much in common, even if our cultures are unique.”

“The first thing I thought of was home when I saw it: the artwork, the political messages, they resembled the street art you would see in Queens or Brooklyn, only for us it’s always about race. It was eye-opening for me, very moving, very powerful. In America we’re kind of in a bubble when it comes to world news, but this made me realise we are all connected. I could see from the art the pain that people felt, the oppression, and growing up in New York City you have that constant feeling too.”

Working with kids just makes your day better, and it’s an opportunity to have a positive impact on their lives

It didn’t take long for her to feel at home in Cork either. “It’s very similar to some cities back in the States, it’s a huge melting pot, everyone in my class is from different countries, people I encounter daily are from different places, so that brings me a little bit back to New York, which is probably the biggest melting pot of all. It gives me that comfort, it’s very diverse, and in Brunell I found a family that has made it easier to cope with being so far from home. And the whole Irish basketball community has become family.”

As part of her commitments, McClure coaches the club’s under-16 girls team, having being involved in similar work back home. “Working with kids just makes your day better, and it’s an opportunity to have a positive impact on their lives. I tell my girls, who I love, that it’s not all about wins and losses, I preach that to them all the time. And they understand that. They have fun with it. I do all I can to increase their skillset. Winning is good, but the ball stops dribbling at one point in life and it’s not about the numbers, the stats you had over your career – it’s about the impact you had on other people, when people talk about you and can say you were a good person.

“And sport gives those opportunities, especially to kids going through tough times. I coached at-risk teens in Harlem for a while, kids who often come from toxic environments. You can go through life feeling like you face adversity every day, and sometimes you do, but these young kids have it worse. You want to give them constant affirmation, advice on how to cope with problems they encounter. You just need to tell them there is light at the end of the tunnel, that they can become someone in this world.”

The highlight of McClure’s sporting experience in Ireland will come at the National Basketball Arena in Tallaght on Sunday when she lines out for Brunell against Pyrobel Killester in the Hula Hoops National Cup final.

The home crowd gave us the adrenaline to keep moving and keep fighting. They carried us home

In Super League terms, this season has been a struggle for the Cork side, and not many gave them any chance of beating League leaders DCU in the semi-finals. But they did just that, creating the mother of all upsets with a 75-68 victory, despite losing their captain Danielle O’Leary to injury, McClure, fellow American Treyanna Clay and Lithuanian Greta Tamasauskaite among their star performers.

“Our hunger and hustle was what won it for us,” said coach Tim O’Halloran. “Exactly,” says McClure. “It has been a difficult season for the team, but we went into that game with the mindset that because it was January 2020, it could be a fresh start. They beat us by 10 when we played in November, but we felt we could close that gap, we just had to play hard from start to finish. And we did. The home crowd gave us the adrenaline to keep moving and keep fighting. They carried us home.”

They’ll be underdogs again on Sunday, Killester – who created their own surprise by beating Glanmire in the other semi-final – having got the better of Brunell in both their Super League meetings this season, although their margin of victory in December’s game was just two points. “And it’s hard to beat a team three times,” she says. “It’s always a battle against them, but I do believe that as long as we go in with the same mindset we can come out on top.”

She finishes her Masters in May, and will probably then return home. “I’ll decide what’s next, see where I can go in life, but whatever happens, this has been an enriching experience on my journey. Ireland is unique, it’s such a beautiful place, and I have made friends for life here.”