America at Large: Pouncey’s rant gets to the heart of how NFL is failing players 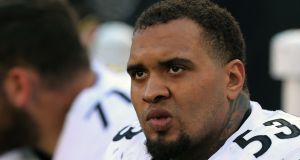 When he learned the exact details of the NFL Players Association’s proposed Collective Bargaining Agreement (CBA) with the league last week, the Pittsburgh Steelers centre Maurkice Pouncey took to Instagram to offer his opinion.

With no shirt on his impressive 6’ 4”, 20 stone frame, this tattooed behemoth delivered an impromptu soliloquy from behind the wheel of a moving car. The palm trees receding against the idyllic blue skies visible through his sunroof as he drove along were somewhat at odds with the robust tone of his commentary on the terms of the new contract.

“Man, the shit’s so f**king crazy, man,” said Pouncey. “I vote no. F**k that shit. Our NFLPA, the dudes at the top, the leaders? Man, that shit all f**ked. Bullshit, F**k that. They ain’t lookin’ out for the best of the players ... They’re trying to sign a bullshit ass deal just so these motherf**kers can sit and their president can go around and smile and say, ‘I got something done’. You didn’t get shit done.”

Stars of brighter wattage also voiced their dissatisfaction on social media but none with quite this verbal aplomb. Aside from lambasting the union leadership, Pouncey also issued a clarion call for solidarity if the league locks out the players for refusing to sign, assuring rookies that elder statesmen like himself had deep pockets and could help their less secure colleagues endure the financial hardship of any work stoppage.

While the foul-mouthed nature of the video garnered positive and negative coverage, Pouncey’s visceral reaction will have carried weight on both sides of the looming industrial dispute.

This is somebody who has been a consummate professional, the epitome of the good soldier in the NFL. An exemplar on the training pitch and a leader in the locker-room during his decade as a Steeler, Pouncey was nominated for last season’s NFL’s Walter Payton Man of the Year, an award recognising individuals making a difference on and off the field.

Figuring in eight Pro Bowls (the equivalent of GAA All Stars), his consistency is all the more remarkable because he has suffered career-threatening injuries that perhaps give him a unique understanding of how precarious this livelihood can be. And how lacking it is in certain regards.

The new CBA would add a 17th game to the NFL’s regular season schedule and expand the playoffs, yet paying many players less than their current rate for doing so. While it proposes lessening the penalties for marijuana use (more and more players use the drug to alleviate pain) and adding vision insurance (astonishing that the players don’t have that right now), it fails to deliver guaranteed contracts – the thing they need most.

In gridiron, alone of the major American sports, the club can rip up a deal the moment somebody loses form and not pay them the money remaining on it. This is why many admit they play hurt for large parts of every campaign for fear of being cut.

In a league where there is no such thing as job security then, the NFL has always had the disturbing feel of a master and servant relationship between owners and players. As LeBron James and others on the outside looking in have pointed out, many of the plutocrats run their teams with the air of antebellum plantation owners viewing the men on the field (70 per cent of whom are black) as merely disposable means of production. Nowhere was that mentality more evident than the way in which the league tried for years to obscure the links between on-field concussion and CTE. Given their willingness to lie about brain damage, the level of distrust is historic, deep-rooted and justified.

The average NFL salary is less than a million dollars a year but around 60 per cent of players draw down less than half that. Astronomical sums to ordinary people, except when you consider these lads are putting their bodies on the line to generate annual revenues of nearly $16 billion and most of their careers will peter out after three or four punishing seasons.

The locker-room joke is that NFL stands for Not For Long and the fleeting nature of the business is why so many live in fear of a lock-out. The window in which they can earn is brief and their seasons in the show may cost them hugely in terms of their physical and mental health for decades going forward.

The players are also irked because they know their league is the national obsession and a licence to print money, with revenues expected to reach $25 billion a year by 2027.

In this regard, their collective mood was not helped either by the timing of the revelations about the new CBA. As so many current stars tweeted their dissatisfaction about being shortchanged and not getting a fair shake yet again, CBS announced it had signed Tony Romo, the former Dallas Cowboys quarterback, to a deal worth $108 million over six seasons. Only 16 current quarterbacks will earn more next year than the admittedly excellent guy commentating on them from the television booth.

CBS know this is money very well spent because, like the team owners, they will profit massively from their investment in the sport through increased eyeballs and advertising. It seems just about everybody in the NFL does very well out of the NFL. Except the vast majority of the 2,000 or so who play in it.