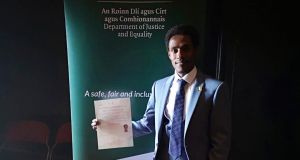 Hiko Tonosa receives his Irish citizenship at a ceremony in Killarney.

The remarkable journey continues. Reigning Irish 5,000m champion Hiko Tonosa can now represent his adopted country with immediate effect after receiving his certificate of naturalisation on the second of day two days of citizenship ceremonies in Killarney.

In all around 5,000 people from 135 separate countries gained their Irish citizenship over the two days, although few will have shared a journey quite like the 24-year-old Tonosa: the murder and oppression of his native Oromo people; the peril of chasing a professional running career in Japan; the fear of being an asylum seeker in Dublin; the unknown of almost two years in direct provision.

In was July of 2017, Ethiopia still under the rule and serious unrest of then prime minister Hailemariam Desalegn, when Tonosa first came to Ireland with nothing more to plan than two track races: the Morton Games in Santry, and the Cork City Sports six days later. On arrival in Dublin, he called home to discover his close friend and running partner had been shot dead on the streets of Shashamane, in the heart of the Oromia region, under such oppression at the hands of the Desalegn regime.

Suddenly Tonosa’s life was under similar threat: “For three or four days I was on the street,” he told The Irish Times last summer. “And then I met guy from Somalia, and he told me about another Ethiopian, Wishu Bedilu Gebreselassie, who I contacted and stayed with for one week. Still I wanted to go back to Ethiopia, but I was told no, ‘you’re name is in the newspaper, if they see you, they will arrest you’, and that was when I went to Balseskin (direct provision centre).”

By chance he was then put in touch with Eddie McDonagh, the long-serving coach at Dundrum-South Dublin, who also helped significantly with his integration. After gaining refugee status in February of last year, Tonosa became the first asylum seeker to win a national senior title when he won the 10km road title in April, followed by the 5,000m on the track in July. On Sunday he finished second to defending champion John Travers in the 3,000m at the Irish Indoors.

With a best of 13:31.09 for 5,000m on the track, Tonosa is already at senior international standard, with a European Championships set for Paris later this summer among his next targets. Since the start of the year, Tonosa has been training with the Dublin Track Club group, under the coaching of Feidhlim Kelly, though he still represents DSD for competition purposes.

Over the two days in Killarney, people the UK topped the table, with 982 becoming Irish citizens. People from Poland were in second place, with 715, and people from Romania third, with 496.