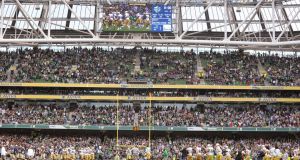 Notre Dame players celebrate after the final whistle of the game against Navy at the Aviva stadium in September, 2012. Photograph: Barry Cronin/Getty Images

A dark and dreary February afternoon at the Aviva Stadium and the only lights shining are the moon lander-like gadgets that keep the grass growing on Lansdowne Road.

John Anthony is pointing out another set of lights: the Uefa Euro 2020 logos dancing along the new electronic ribbon that runs around the midriff of the stadium as preparations continue for this summer’s pan-European festival of football.

Anthony is looking forward to a game of football, just not the meeting of Sweden and Poland on June 19th, or the potential meeting of Germany and England in the last 16. It’s the meeting of his alma mater, Notre Dame, and the United States Naval Academy in the Aer Lingus College Football Classic – the opening game of the 2020 college football season – that he’s envisaging packing out the Aviva.

He has a vested interest in the success of the event, with the eponymous travel agency he formed in 1989 responsible for bringing the majority of the 35,000-plus American visitors due to land here for the game on the final Saturday of August: that’s right, the day before the final Sunday of August and the All-Ireland football final.

Global and local pandemics allowing, packed houses and hotels will provide a bonanza weekend for Dublin hoteliers, restaurateurs and publicans, although Anthony points out that many of the supporters of Notre Dame – a team known as the Fighting Irish – and Navy are interested in seeing much more than the capital on their visits to the country, many returning for the second time after the teams met at a drenched Aviva stadium in 2012.

The numbers are mind-blowing, with the event eight years ago seeing a boost to the economy of more than €85 million, when 35,000 made the trip. With that figure set to be exceeded, it would represent a new record for the largest number of Americans travelling outside of the US for a single sporting or social event.

Anthony admits bringing in that amount of transatlantic travellers is easier than when he first was involved for the meeting of the same two institutions at Croke Park in 1996.

“One of the great things that has happened is the increase in air capacity from north America to Ireland since this started. If you look back, actually in 1996, the first time we did this, we had to charter more planes than we do now. There’s enough commercial lift to take care of that.”

The logistics of bringing two college football teams to Ireland are impressive, with the 300-strong Notre Dame marching band taking up their own charter flight, with another cargo flight just to cope with the equipment required for their 110-strong playing staff. That’s right, 110.

The big bonus this year for Ireland, in exposure terms, is the involvement of ESPN’s College GameDay, with the hugely popular build-up show being broadcast live coast-to-coast stateside from College Green in the build-up to the game, which will kick-off at 7pm local time, allowing for prime-time viewing in American markets.

“They are going to do a longer broadcast than usual, four hours; so live from Dublin for four hours before kick-off, [then] for another 3½ hours,” says Anthony. “So it’s a 7½ hour commercial for Ireland on every television set in America. The game audience, ESPN expects four million people to watch; GameDay, I suspect, will have over two million watching, it kind of just builds through the day.”

The eyeball count will be raised with the game being billed as Week Zero, the only game in town so to speak. And with both sides having enjoyed fine 2019 seasons with 11-2 records, Notre Dame (12th) and Navy (20th) both finishing in the Top 20 on the Associated Press national rankings.

Both schools play an entertaining brand of football, with Notre Dame running out comprehensive 52-20 winners over the Navy Midshipmen in last season’s game, although that encounter marked the end of a sell-out streak of 273 games at Notre Dame Stadium in South Bend, Indiana, going back to 1973, a crowd of just over 74,000 turning up at the 77,622 capacity ground.

Anthony doesn’t see any chance of the game in Dublin not selling out, with tickets remaining after package deals and sales to both schools going on general sale through Ticketmaster on March 20th.

“The 2012 game had 35,000 Americans, so we’re probably going to top that. But we’ll see, we’re going to be in that range,” he said before adding that he expects the remaining tickets to sell out quickly.

With the NFL looking more and more at the college game for innovation, Anthony points out just how vibrant the game is below the professional level – if college football can even be deemed so nowadays in any other way than that players are not paid.

“It’s interesting, I read something that a big football mind said: the NFL game follows the college game, and the college game follows the high school game, in a totally different way that we think of it. His point was that they get more creative, and the new things are tried at the lower level and then they get success and then they work their way into the mainstream as they go.”

As far as what the newcomer can expect, Anthony believes Irish fans might recognise a little more of what they would expect at a Six Nations game from the run-orientated Navy team, whose players are recruited for more than their football ability.

“It’s really a case study in almost like the perfect match of military intelligence and strategy, because they have restrictions on what size and what kind of players they can get to go to the Naval Academy because they have to be able to fit into a submarine. They’re not as big as some of the other guys, and so they’ve been able to turn that almost into a strength with this quick-execution [offence, with] some deception involved.”

For many, though, it will be the entertainment value that will be key, and Notre Dame, with its famed marching band, and the Naval Academy’s Drum & Bugle Corps and gymnasts certainly tick the boxes on that score.

“As we learned in the ’96 game, the Irish love to talk about the razzmatazz around our college football games,” said Anthony. “In America we call it the pageantry, so that will be very much part of it. Notre Dame is bringing a 300-person marching band so you’ll see them in town. We’ll have a parade on Thursday evening in the city centre, with the high school teams that are playing on the Friday and the marching bands from Navy and Notre Dame.

“There’s a pep rally on Friday, College GameDay on Saturday, all the pre-game around College Green and Temple Bar on Saturday will be packed. We’re working on trying to let the American visitors get more like an Irish experience of how to get to the Aviva on game day as in walk up, make some stops along the way if they’d like.”

Up for the match? You bet your bottom dollar.