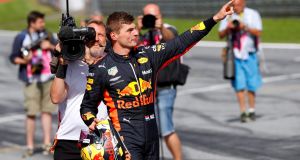 Max Verstappen won for Red Bull at the team’s home race, the Austrian Grand Prix, his first of the season. But the race turned from frustration to disaster for the championship leader Lewis Hamilton, who was forced to retire on lap 63 with a fuel pressure problem. With the Ferrari’s of Kimi Räikkönen and Sebastian Vettel in second and third, Hamilton has lost his title lead, with a 15-point swing in favour of the German who now leads by a single point.

It is the first time Red Bull have won their home meeting and Verstappen ran his race to perfection, running with exemplary control, pace and skill while managing his tyres, where others suffered from blistering that severely hampered their races.

“This is amazing,” said Verstappen. “In front of all the fans at the Red Bull Ring and in a Red Bull.”

Vettel had started from sixth after a grid penalty and will be exceptionally pleased that what had begun as damage limitation turned into a major advantage over his title rival. Räikkönen too was superb, also running his tyres well and charging after Verstappen at the end but was just unable to catch the Dutch driver.

For Mercedes it was a different story, however. Valtteri Bottas, who had started on pole, had further bad luck in a season marked by ill-fortune, a loss of hydraulic pressure forcing him to retire on lap 14. Hamilton fared little better. The team’s decision not to put him into the pits under the safety car meant he lost the lead and then he was unable to challenge with heavy rear tyre wear, that ultimately forced him to go into the pits twice. A poor afternoon that fell apart when, disconsolate, he had to retire. Worse still the spectre of grid penalties later in the season now hang over the team when they have to replace power unit components.

The pit error is not the first for Mercedes this season. It compounds a software miscalculation that cost Hamilton a win in Australia and the very similar decision not to send him into the pits under the safety car in China that led to a Red Bull victory for Daniel Ricciardo.

This is Verstappen’s fourth win, his first this year and his first in Austria. It could not have come at a better time as the young Dutchman has faced questions about his driving style after being involved in a series of incidents this season. The victory will have gone a long way to silencing the critics.

Looking for a strong, clean performance, he and Red Bull were able to deliver in Austria. The team made the most of their chance on a track that should have been strongly in favour of Mercedes and Ferrari and it will be a huge boost, especially given that Mercedes also employed their first major aero upgrade at the Red Bull Ring.

Verstappen had been only fifth in qualifying, during which he and Ricciardo had a spat, over who should be in front, creating a tow over the single lap. Ricciardo was at fault and the issue was resolved but it had been a less than successful or harmonious session. Verstappen started from fourth after Vettel’s penalty and was able to make the most of it when it mattered.

Hamilton had made a superb start as did Räikkönen, who speared his Ferrari into second at the expense of Bottas who was a little sluggish off the line and dropped to fourth. Räikkönen went wide at three, however, and Bottas had recovered to second, sweeping round the outside of four, while Verstappen too had passed Räikkönen for third.

It had been a frenetic opener and it continued with Vettel dropping to eighth but making it back to sixth within two laps. Out front Hamilton promptly pumped in some of the fastest laps and had a clear two seconds on his team-mate by lap eight, with Vettel almost 10 seconds back. The British driver looked to have the race in his pocket.

Bottas’s retirement brought a virtual safety car period and both Red Bulls and Ferraris used the opportunity to go into the pits and take the soft tyre, with Mercedes opting to keep Hamilton out. The team admitted it had been an error. “It is my mistake, just give us what you can,” said Mercedes’ chief strategist James Vowles.

Hamilton went into the pits on lap 25 for the soft tyre and he duly emerged behind Verstappen, Ricciardo and Räikkönen, with Vettel in fifth. With left rear blistering Ricciardo was forced to pit again and lost position by which point Vettel closed to DRS range on Hamilton, who was also suffering with blistering and passed him with a bold move running deep into turn three. Vowles once again apologised to a clearly frustrated Hamilton. “I have thrown away the win today,” he said.

Verstappen was untroubled by the squabbling behind him with a six-second lead by lap 45. However, with Hamilton’s left-rear wear worsening the team had to pit him again on lap 53 and he emerged behind Ricciardo in fifth place. The Australian retired a lap later with a gearbox failure and in a race that proved heavy in attrition Hamilton’s hopes came to a crushing halt shortly afterwards at the side of the track.

The Haas cars of Romain Grosjean and Kevin Magnussen picked up their best team finish with fourth and fifth, with Esteban Ocon in the Force India in seventh in front of his team-mate Sergio Pérez. Fernando Alonso started from the pit lane, but came back to eighth for McLaren. Sauber’s Charles Leclerc was brilliant again to take points in ninth with his team-mate Marcus Ericsson in 10th.