Lighter conditions to suit proven J109s in Round Ireland Race 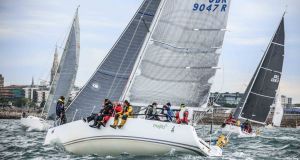 The prospect of a light air Round Ireland Race hands the advantage to a cluster of proven J109s for Saturday’s race from Wicklow even though a Grand Prix UK visitor has been widely tipped for success in the 700-mile race next week.

Wind – or the lack of it – is the subject on everyone’s lips in Wicklow harbour this morning, some 24 hours before the 20th staging of the biennial race.

A diverse fleet is entered for the handicap challenge that will see boats home in less than five days but not much sooner.

The mix includes 60-foot Round-the-World yachts right down to 21-foot small inshore cruisers, all racing for the same handicap prize.

Wider modern designs in the fleet will excel in strong breeze whereas some of the less modern shapes, with more modest sterns – such as the J109s – often do very well in lighter conditions.

The former Fast 40 yacht, Baraka GP, Niall Dowling’s chartered Ker 43, comes laden with a crew of pro-sailors and a formidable record of international success but this must be weighed up against the local knowledge of some potent J109 entries such as current Irish Sea ISORA champion Mojito (Vicky Cox & Peter Dunlop) from North Wales.

The Pwllheli Sailing Club entry is perhaps one of the most well-blooded in the nature of Irish coastal breezes but entries such as Michael Boyd’s chartered J109, Jedi have also campaigned equally hard round Ireland.

The big question on Saturday will be whether the underlying east to northeast gradient wind will prevail, emphasising just how much wind conditions are set to play a part in this offshore marathon.

“Sea breeze is all very well but that typically only lasts a few hours. What’s really required is a steady gradient”, according to Olympian Mark Mansfield, sailing with Paul O’Higgins on the also fancied JPK10.80 Rockabill VI, the winner of last season’s 300-mile Dun Laoghaire to Dingle Race.

In a boost to the race’s international standing, no less than five class 40 yachts drawn from four countries are competing with the recent winner of the solo Mini Transat, Ian Lipinski racing the circuit in the new Mach 40 ‘Corum’ with former Figaro race winner Nicolas Troussel.

The Volvo Round Ireland Race starts at 2pm on Saturday off Wicklow harbour.

Organisers of the Flying fifteen British National Championships at Strangford Lough in County Down are bearing the brunt of the high-pressure weather system. Despite postponements, an excellent entry of 50 boats has lost two days of racing because no wind has materialised so far.

A total of 14 Irish sailors will compete in Denmark at the Sailing World Championships in just over a month’s time for the first 40 per cent of places for the Tokyo Olympic Regatta.

Missing from the line-up in Aarhus, however, will be Olympic Silver medalist, Annalise Murphy who has embarked on a new campaign in the 49erFx dinghy with Cork’s Katie Tingle. Competition starts on 30th July with 1,500 competitors from 100 countries expected.