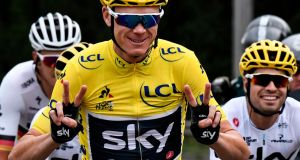 Organisers of the Tour de France have formally forbidden Chris Froome from signing in for this year’s race, which starts on Saturday, in a last-ditch attempt to stop him competing, according to reports in Le Monde.

The race’s owner Amaury Sport Organisation (Aso), have made the move in order to protect the image of the race because Froome’s appeal against his drugs test from last September has not been resolved. The cyclist has always maintained he never broke the rules.

However Team Sky are appealing against the decision to the court of arbitration of the French Olympic Committee, who will consider the case on Tuesday and make their decision known on the following day according to Le Monde.

Whatever they decide, the decision could be appealed to the court of arbitration for sport, but they will probably not have a chance to rule on the case before the beginning of the Tour.

A Team Sky spokesman told the Guardian: “We are confident that Chris will be riding the Tour as we know he has done nothing wrong.”

On Friday the race organiser Christophe Prudhomme admitted the lack of a verdict on Froome was far from ideal.

“It’s terrible that the sporting authorities have not managed to solve this problem before the start of the world’s biggest race,” he added. “I won’t say anything more but of course, rules have to be modified.

“An abnormal control doesn’t mean anything to a large public. It has to be black or white, positive or negative.”

Aso’s case is based on not wanting to find itself in the same situation as organisers of the Giro D’Italia, who saw Froome win the maglia rosa despite the lack of a verdict on Froome’s appeal over the adverse analytical finding at last year’s Vuelta a Espana – where double the permitted dose of salbutamol was found in his system after a urine test after stage 18 of the race.

Aso points to article 29 of its own rules (in compliance with UCI’s rules), which states that “Aso expressly reserves the right to refuse the participation in – or disqualify from – the event, a team or one of its members whose presence is liable to damage the image or reputation of Aso or those of the event.”

If Froome does get the all-clear he will be seeking his fifth victory in the race as well as his fourth successive Grand Tour victory when he arrives in the Vendee region for the Grand Depart.

However, many remain unhappy that he is still competing, with five-time Tour winner Bernard Hinault arguing recently that Froome’s competitors should strike if he competes. - Guardian sport