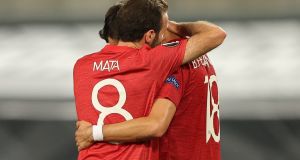 Bruno Fernandes’ extra-time penalty edged Manchester United through to the Europa League semi-finals as Ole Gunnar Solskjaer’s side toiled to victory against gutsy FC Copenhagen last night. Also through to the final four of the competition are Inter Milan, who beat Bayer Leverkusen 2-1 with Romelu Lukaku on target. Tonight, Wolves face Sevilla in their quarter-final, extra motivated to win for the injured Jonny Otto who sustained a serious knee injury in the previous round. That kicks off at 8pm. There was also FAI Cup action last night as underdogs Finn Harps shocked St Pat’s thanks to an early blunder. And in transfer news, Premier League champions Liverpool have completed the signing of Greek left back Kostas Tsimikas from Olympiacos.

The GAA has allowed clubs within Kildare, Laois and Offaly to open for training in line with government guidelines, as released on Friday. Training will be on a non-contact basis and in groups of no more than 15 people. In an interview with Sean Moran, Kildare chairman Mick Gorman calls on the government to remember the importance of sport: “I think recognition is due for the part that sport plays in community life in difficult times, keeping spirits up and protecting mental health. Usually it’s the first thing shut down but the benefits and what it does for the community should always be kept in mind.”

1 Ireland should allow controlled spread of Covid-19 among under-60s, Swedish expert to tell committee
2 Ireland’s top earners ‘do not see themselves as rich’, study finds
3 Air travel never going ‘back to way it was’
4 Miriam Lord: Let’s call a spad a spad – this Government has woeful timing
5 Gordon D’Arcy: the next fear for Irish rugby is England in Twickenham
6 What is wokefishing, the latest online dating deception?
7 Róisín Ingle: I hated those wearable ‘fitness yokes’. Now I’m one of those people
8 Bank of Ireland sees more than 1,400 staff apply for redundancy
9 US senators to consider Trump’s supreme court nominee
10 Sitka spruce plantations ‘affect your mental health’ – Leitrim farmer
11 Covid response leaves no surprise that tensions are rising across school system
12 People aged 15-34 now account for 40% of Covid-19 cases
13 Katherine Ryan: ‘I definitely felt shame as a single mother, the way people word things’
14 Dublin farmer discovers overnight rave on his land
15 Our neighbour says he has permission to build on our boundary wall. Can he?
16 Unions quit Low Pay Commission over proposed minimum wage increase
17 Róisín Ingle: We’re in a different pandemic place now. Nobody’s quoting Seamus Heaney any more
18 Should I switch bank now with Ulster Bank at risk of closing?
19 Volvo’s XC40 plug-in hybrid beats the BMW X1 – how did that happen?
20 Government to consider reversing cuts to Covid-19 payment
21 Further restrictions expected for Dublin if Covid-19 infection rate does not stablilise
22 Obesity linked to hospitalisation and ICUs for Covid-19 patients
23 Wealthiest homeowners to gain most from property tax cuts
24 Why are men still explaining things to women?
25 Enduring mystery of those missing magical cars continues to baffle
26 David Moyes discovered positive test an hour after arriving at London Stadium
27 Coronavirus vaccine: 15 billion doses needed to inoculate the planet
28 Arms trial anniversary: McEntee pledges to release 1970s records ‘as appropriate’
29 How to identify and develop soft skills in a pandemic
30 Seán Moran: Fallout from Tyrone final celebrations will concern GAA
31 How can I tell my husband it is over and I want a divorce?
32 Ellen DeGeneres apology: Why do her words sound hollow?
33 Mary Lou McDonald talks frankly of her struggles with anxiety
34 South Dublin land at €19m has scope for up to 500 homes
35 Visitors from non-green list countries a Covid-19 risk, Shortall warns
36 Should you consider a postgrad during the pandemic?
37 Traveller poverty, work and discrimination focus of EU report
38 French investor acquires Cherrywood office investment for €27.7m
39 BoI redundancies, ‘tax war’ warning for Ireland, and retailers in rent arrears
40 Eileen Flynn: ‘As a Traveller woman, I was undermined in the maternity hospital’
Real news has value SUBSCRIBE