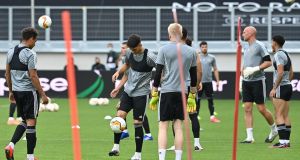 Wolverhampton Wanderers’ players take part in a training session on the eve of the Uefa Europa League quarter-final against Sevilla. Photo: Ina Fassbender/AFP via Getty Images

Nuno Espírito Santo and his Wolves players have said the loss of Jonny Otto to a serious knee injury makes them even more determined to conclude their marathon season with European glory.

Jonny suffered cruciate ligament damage in Thursday’s victory over Olympiakos and will be out of action until next year, with Ruben Vinagre likely to replace him in Tuesday’s Europa League quarter-final against Sevilla.

Nuno said: “Jonny is an amazing and important player for us, we know he is going to be out but his spirit is going to be here for us.” Midfielder Rúben Neves added: “We have a bit of extra motivation because we want to play for Jonny – he is one of us. We want to give a win to our fans and to Jonny.”

While the loss of such a key player is an unwelcome complication for Wolves as they prepare to face a club that has won the Europa League more than any other, Nuno believes his team have developed unique qualities over the last three seasons that can help them rise to yet another challenge.

“In three seasons we have been able to create an identity,” he said. “That is one of the most precious things we have in football. An identity based on a style of play, how we socialise, our rules, our tasks, how we deal with problems and all the situations that can improve a team. I’m very proud of how we have done things. That is what we want to show [against Sevilla]: that we are a good team with an identity and a commitment to the challenge. Let’s go for it.”

Neves added that lifting a European trophy and qualifying for the Champions League would represent a wonderful new step in a journey that began when the club was in the second tier. “It’s not easy to come from the Championship and come seventh two years in a row in the Premier League, ” he said. “It was our goal when I arrived at Wolves three seasons ago to try to improve as a club, to get to the highest level that we could. We need to be proud of what we have done so far. Now we just need to improve even more and put the club at the very highest level.”

Wolves acknowledge their opponents’ pedigree but are undaunted by it. Sevilla finished fourth in the Spanish league this season, are unbeaten in 18 matches in all competitions and have a particular affinity for the Europa League, which they have won five times.

“We know they have won it before but this is a different tournament now with just one-leg ties [from the quarter-final onwards],” said Neves. “It’s a completely different way to play the Europa League.” Sevilla have some experience on that front, however: their last-16 duel with Roma was played over one leg last week. What is more, that took place in Duisburg, the venue for Tuesday’s showdown with Wolves. The temperature in the German city is forecast to be above 30 degrees at kick-off.

Neves, a Portugal international who has grown accustomed to English conditions, concedes that the heat gives an edge to the team from southern Spain. “It’s the only thing they have ahead of us,” said Neves. “But we need to be ready to play whether it’s sun or rain.”

Neves’s hunger to prolong his career’s upward trajectory could be to the detriment of the man who started him on his path. Sevilla’s manager, Julen Lopetegui, gave the 23-year-old his professional debut when he was in charge of Porto. “I can’t lie, he’s a very special coach to me,” says Neves. “He played me at 17 and that was a great thing for me. Back in 2014, it wasn’t really usual for coaches to give minutes to academy players. I’m very thankful to him, he started my career. But I want to beat him.”

One Sevilla player whose career is attracting particular interest is Diego Carlos, the centre-back reported to be a target for Liverpool, among others. When asked about that link at the pre-match press conference, the Brazilian defender declined to reply. – Guardian