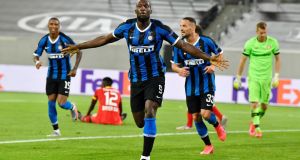 Inter Milan’s Belgium striker Romelu Lukaku scored and tormented the Bayer Leverkusen defence as he led his side into the Europa League semi-finals with a 2-1 win on Monday.

Nicolo Barella put Inter ahead after 15 minutes, driving the ball home after Lukaku’s shot was blocked, and six minutes later the Belgian got on the scoresheet when he displayed his strength by holding off defender Edmond Tapsoba before firing home.

Leverkusen winger Kai Havertz, reported to be a transfer target of Premier League club Chelsea, pulled a goal back for the Germans but it was goalkeeper Lukas Hradecky who kept them in the game with a string of fine saves.

Lukaku placed the ball on the penalty spot once in each half only for the Video Assistant Referee (VAR) to overturn both decisions, but it did not stop Inter setting up a semi-final against Shakhtar Donetsk or FC Basel who meet on Tuesday.

1 Suarez’ Italian language exam rigged according to prosecutors
2 What next for green jersey hero Sam Bennett after toughest of Tours?
3 LeBron James has become this generation’s Muhammad Ali
4 French rugby chief Bernard Laporte held for questioning over Montpellier ties
5 Why this weekend’s Champions Cup semi-finals are still worth watching
Real news has value SUBSCRIBE
Crossword Get access to over 6,000 interactive crosswords