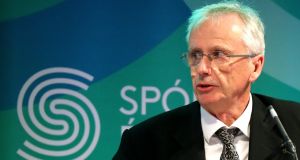 John Treacy, chief executive, Sport Ireland: “We have to tier [resources] like every other country does. We are already doing it.” Photograph: James Crombie/Inpho

We have two new buzz phrases. They are multi-annual funding (MAF) and tiered funding (TF). New to Ireland, not new to the world. New Zealand, the sporting mirror image Ireland would love to be, does MAF and TF.

Yesterday as Sport Ireland unveiled its national governing body and high performance investment plans, as well as the review of the Rio Olympic Games – pretty much a gut-busting volume of information – MAF and TF were added to the sporting lexicon.

Sport Ireland’s chief executive, John Treacy said TF was in the plans, but it would not mean medals at all costs. TF is what the British have done: they have axed sports from funding that, medal-wise, were not pulling their weight.

British badminton, wheelchair rugby, archery, fencing and weightlifting lost their UK Sports’ funding at midnight on March 30th. TF is removing or reducing funding to some sports and funnelling it towards others that understand how to medal.

“I think what you are referring to there is maybe the comments that Ed Warner [UK athletics chairman] made. He was making the point that it’s not medals at all cost,” said Sport Ireland’s chief executive John Treacy. That’s exactly what it seemed to be. “It is not all about gold, silver or bronze. So we need to be careful that we don’t go that direction.”

“If we have limited resources we have no choice only that we have to tier them like every other country does. We are already doing it. The top 10 [Irish] sports will get 80 per cent of the funding. We are moving in that direction but we haven’t formalised it.”

That was TF, a gird-your-loins warning to those who can’t deliver. But on Wednesday in Dublin, sport also got what it has always got, not MAF but one year’s funding .

It is just over €20 million for 2017, around the same as last year and nothing approaching the best world practices of MAF. That is because, despite Minister of State for Tourism and Sport Patrick O’Donovan enthusiastically preaching the gospel of MAF, there isn’t any money to do it.

Once again, top Irish athletes, including Olympic medal-winners, have been condemned to a year-by-year, drip-feed funding mechanism. For them it was Groundhog Day.

“We have funding issues,” said chairman of Sport Ireland, Kieran Mulvey. “We have taken the hit.”

“I consider the year-to-year funding in sport as an inhibitor to sport,” he baldly added. “They [athletes] need knowledge of continuity that they can plan one, two, three four years ahead.

“We need to make that commitment to our athletes over a multi-annual time period. We need to fund our NGBs [national governing bodies] more than we are funding them.”

It was a grand event, where O’Donovan spoke of the “stark” Rio review and its warts-and-all honesty. “It’s not all apple pie and motherhood and things like that,” he said.

He was right in that. Badminton referred to “lack of financial support”. Cycling said “the current capacity was overwhelmed and unsustainable”. The gymnasts prepared as well as they could “given the facilities and the funding”.  In rowing, “budget cuts of 25 per cent took place”, while the hockey team had a shortage of manpower “as a result of the shortage of finances”.

MAF was the idea in the room that everyone believed in, but nobody could deliver. It is the New Zealand syndrome. Little Ireland with a population of 100,000 people more than they have has just a quarter of their sports budget and a fraction of their success.

“What is encouraging is that they have called out the challenges that are there. But performance sport does not wait. The issue we have is our competitors are moving ahead.

That was O’Donovan’s thinking, an action plan. It is just that it is not going to happen this year even though the 212 pages of the Rio review, with its info graphics, top 10 finishes, reviews, recommendations, strategies, pie charts and feedback , said two things.

Ireland does not fund sport seriously. Ireland did not hit the targets set for the Rio Olympic Games.