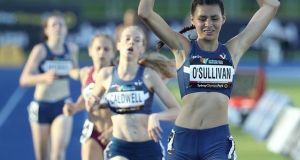 Sophie O’Sullivan crosses the finishing line in first place during the Australian U-17 championships in Sydney.

It’s funny how Sydney will always have a special place in my running career, yet it’s a place I hardly know at all. I’ve only made a few visits there since the Sydney Olympics, coming up on 17 years ago already.

So being back there for a few days last week stirred a lot of memories, especially in and around Sydney Olympic Park, the venue for the Australian national athletics championships.

You wouldn’t realise unless you need to go to the stadium that those Olympics actually took place in a western Sydney suburb of Homebush, nowhere near the famous Harbour Bridge or Opera House. That meant a bit of strategic planning when trying to work out where to stay and how to get around.

My daughter Sophie was competing in the under-17 national championships, running the 800m and 1,500m, which meant going back and forth to the stadium everyday for four days. In that situation you don’t want to be too close or too far. At 15, Sophie wasn’t born when I ran those Sydney Olympics, so all this was new to her.

It’s also a delicate balancing act trying to fill your days without using up too much energy ahead of racing, while also trying to find some time to escape, and avoid counting down the hours.

We arrived on Saturday night, while there was talk of the need for heats on the Sunday evening, we’d a fair idea these wouldn’t happen. It would be a straight final on Monday evening. Still we had to be there, just in case, which meant all of a sudden we had even more time on our hands. At least our Airbnb was perfect, located midway between all that Sydney has to offer and the stadium.

Early Sunday morning, I headed out on foot to try and get my bearings around the stadium and how best to travel to and from the track. Back in the 1990s I became an expert at passing time on the days between big races. This was before the internet or any social media, so it meant exploring the local area, finding a nice park and coffee shop, and reading the local papers to while away the hours.

I took the scenic route to the stadium, shadowing the bus route that we would end up taking on race days, then found an even nicer route back through Bicentennial Park, which I never even knew existed all those years ago.

Sunday was now a day off, so we headed to the Taronga Zoo, again having never been there before. It makes for a fantastic day out in Sydney: a quick train ride to Circular Quay, where you can catch a ferry across the harbour, then a cable car up over the elephant enclosure to the top of the zoo. It was a hot, sunny day so knowing you could get a glimpse of most animals on the way downhill made for a perfect walk through the zoo.

We were so excited about getting out in Sydney I forgot to pack any snacks to keep us going, so once we returned to the ferry the priorities were becoming obvious: coffee for me, food for Sophie.

Both being hungry and particular about where and what to eat, this wasn’t ideal. I pulled out my old Monocle guide to Sydney, which believe it or not some people still read, causing obvious embarrassment to my 15-year-old daughter as I played tourist for the day.

We found a nice cafe, and my coffee certainly hit the spot, although food would have to wait. Sophie had iced chocolate milk, and semi-satisfied we headed up towards Oxford Street, with plenty of choices. Sophie settled on a place called Fishbowl, healthy fast food that we ended up visiting each day. When you find your perfect pre-race meal it’s also best not to change, especially if it works.

Once that race date finally comes around, and it could the Olympics or national championships, the athlete’s day revolves around the race start time, the check-in time, then the call-room time. I know I used to check the time over and over again on race days, counting back the hours, when to wake up, when to eat, when to get showered and changed and leave for the track.

I felt myself falling back into the race day plan, the only difference now being my job was done once I got Sophie to the stadium in plenty of time, into her race bubble, and the countdown clock to race time.

As we walked into the stadium, which was the warm-up track for the 2000 Olympics, I got this sudden vision of my dad walking through the same entrance, as I was getting ready for the Olympic final. I kept trying to work out where everything was, those 17 years ago, but if all felt so different now.

As Sophie was warming up, I went in search of a big grass hill, where the path winds around up to a viewing point, which I remembered we could see from the Olympic village. Pointed in the direction of the hill, I passed the Olympic Stadium, now a multi-sport venue, which most recently hosted Adele in concert, with just over 90,000 attending, not far off Olympic capacity.

Once at the top I could see the Olympic village, the connecting bridge to the Olympic Park, and so many good memories came flooding back.

I hadn’t too long to reflect though, as it was time for a speedy walk back for the girls’ under-17 final. Just like my dad back in 2000, I went for a quick check at the warm-up track, and met Sophie as she was on her way to the call-room, the last stop on the way to the start.

This is a final check of numbers, and spikes, and where you’re given hip numbers, useful to read in the photo finish of a tight race. Sophie was smiling, gave me a quick high-five, and I hurried back to find a spot alongside the 1,500m start, where you can also get a good view of the finish line.

Some people find it interesting that I don’t have any input in Sophie’s training or tactics. My main role is transport and entertainment and ensuring the priority is enjoyment. And I’m quite happy to sit back and watch things unfold from a distance, and let Sophie decide where the road takes her.

Here, it took her to somewhere I never got, to stand on the top step of the Sydney Olympic podium. And twice, actually. Of course the Olympics are still a faraway dream for her, and each year so far has been a step in the right direction, learning something new along the way. It’s also a first national medal for Sophie, so she’s always been chasing, knowing what it’s like to lose and now to win, knowing as well to keep all things in perspective.