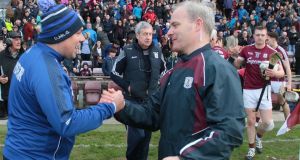 Last weekend showed just how important the leagues in hurling and football have become for teams.

From Tipperary’s last-minute goal which pipped Armagh to promotion from Division Three, to Kerry’s late surge to a Division One final, and Jerome Johnston’s brilliant late free for Down to keep them in Division Two, it was dramatic stuff.

So it was very much out of the ordinary to travel to Pearse Stadium on Sunday to see two teams battle through the Salthill traffic, and then play hugely weakened opponents. Cian O’Neill making changes to his already-promoted Kildare team made a certain amount of sense, but the sheer number of changes (14 in total from the game against Clare the previous week) made it seem almost unprecedented.

And as for Waterford’s decision to make nine changes of their own – and give six players their league debuts – it didn’t make sense at the time, and it still doesn’t in a lot of ways. Waterford don’t play again until June 18th, when they face the winners of Cork and Tipperary.

If Waterford go all the way and win the Munster and All-Ireland championships this year, for instance, that game last Sunday will account for precisely 10 per cent of their entire calendar of league and championship fixtures for 2017.

Their manager Derek McGrath said earlier in the year that the current league format doesn’t lend itself to any sort of experimentation. The smaller six-team division, and the speed with which the games arrive one on top of the other, means the chance to blood new players is severely limited.

But it still seemed very strange indeed to be walking into the ground for two massive games in the context of both the Galway footballers’ and hurlers’ 2017 seasons, and to be second-guessing the level of resistance they were going to meet.

Kildare’s decision to keep on the bench many of the players that have been central to their securing promotion, with a game to spare, led to the rather farcical situation where every black-card worthy tackle by a Kildare player was worse news for Galway than for it was for them. The more black cards that were handed out, the more A-listers were going to be introduced.

I would hesitate to borrow Brian Kerr’s memorable phrase, used on RTÉ Radio One recently, that we were being ‘swizzed out’ of two competitive games, but what should have been a cracking atmosphere certainly suffered . . . until the games started, and both teams in maroon seemed to have difficulty getting to grips with finishing off teams that seemed beforehand to be displaying only a passing interest in winning.

The exact psychology of facing weakened teams is not something too many GAA teams have had to grapple with. The sheer paucity of actual competitive fixtures in the year usually put paid to that. But we see it in other codes all the time. Entire competitions are rendered less important by weakened team selections in English football.

Closer to home there was an outcry when the four main Irish rugby clubs all rotated their squads over the Christmas period last year, thereby denying fans the chance to see four truly competitive inter-provincial clashes in the Pro-12. But given the demands of playing 30 or more games of professional rugby over a 10 month season is easier to square that policy than it is given the playing demands facing your average inter-county player.

When a competition is not universally recognised as the only show in town, like the Pro-12 in rugby, or the national leagues in Gaelic games, weakened teams really do hurt it. There can be absolutely no disputing the merit of Wexford’s win over Kilkenny in Nowlan Park for the simple reason Kilkenny don’t take anything less than 100 per cent seriously. But when that stunning victory existed side by side with a defeat for a Waterford team shorn of two thirds of its main men, it rankles.

Kildare and Galway will go at it again this weekend, but Meath have every reason to feel aggrieved. They were hammered by ten points by Kildare in Navan when the two teams met, and then lost to Down, so they can have few complaints, but they were also the only team to beat Galway in the league.

They played seven opponents going at full-tilt, while Galway faced six, but they finish third in Division Two for the third time in four years.

The fact Galway were put to the pin of their collar to win both games means that bizarrely it seemed like all four teams left Salthill reasonably happy with themselves. Derek McGrath said as much on League Sunday on RTÉ 2, when he said that “essentially we got what we wanted out of the game”. He added . . . “bar the victory”, but that really did seem like an afterthought.