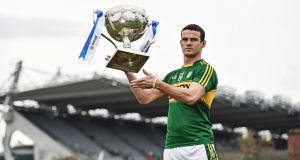 For all the few distractions in Kerry during the week – Colm Cooper hanging up his golden boots, Eamonn Fitzmaurice getting a little hung up on criticism – the show simply goes on, and no one senses that more than the players handed the slightly unexpected league reprise against Dublin.

And Shane Enright, in particular: injured in the draw with Dublin back on March 18th, and missing the last two games against Cavan and Tyrone, Enright is back on track to play some part in Sunday’s league final in Croke Park, with some added motivation to boot.

That draw with Dublin, while ending a four-game losing streak against their old rivals, was one most people in Kerry felt they’d left behind. It also afforded the All-Ireland champions the chance to go on and break Kerry’s all-time unbeaten record of games, Dublin extending it to 35 when beating Roscommon the following week.

What better way of buying back the favour than denying Dublin a fifth league title in succession?

Enright is not getting too hung up on that, however, and instead sees Sunday’s showdown as another invaluable opportunity for Kerry’s younger players to test themselves against Dublin – especially in Croke Park. Ronan Shanahan, for example, who has taken on a more conspicuous role as one of Kerry’s corner backs during his absence.

“Yeah, he’s played very well,” says Enright, who at 28, and in his seventh season, now qualifies as one of Kerry’s most qualified seniors.

“He (Shanahan) came in this year and had a brilliant league and the league final on Sunday is going to be great for the likes of him, Jack Barry and Kevin McCarthy. That’s what we need going into the championship.

“They’re young and fit. And we’ve got a bench we can bring on too, and I suppose that will be important on Sunday. The big thing is that the players come off the bench, put in a big performance and do what they’ve been asked to do. The Dubs have subs that always perform well, and we’ve got to do the same.

“The under-21s as well, a lot of them have two or three minor (All-Ireland) medals. They’re going very well in the under-21 championship at the moment and have an All-Ireland semi-final coming up in a couple of weeks.

“They beat Cork comprehensively last week and those fellas have a winning mentality. A lot of them were involved with St Brendan’s and have won colleges’ titles. They’re used to winning and we have to bring a few of them and we have; there’s a number in at training and hopefully they’ll help bring the whole thing to a new level. There’ll be greater competitiveness in training.”

Enright’s own stop-start season (he was also concussed in the Donegal game) has been frustrating, especially when watching most of the Dublin game from the line, having tweaked his hamstring after 15 minutes.

“It was a really intense game, and I was sickened to have go off myself, because there was such a crowd there and we probably should have won. We gave away a bad ball at the end which allowed them to level it up. In fairness to them, they’re very hard to beat, probably the top team in the country and that’s why – you can see it on their unbeaten run at the moment.

We don’t listen to what people write about us, we worry about performing on the pitch.

“But we’re concentrating on Sunday on its own merits. It’s an Allianz league final and it’s 70, 75 minutes. If we perform for the 75 minutes we’ve got a great chance and we’re not going to think about the games gone by – we can do nothing about them now. It’s all about Sunday and hopefully we can put in a performance.

“Our form is on an upward curve and we played well against Tyrone on Sunday. It was probably our best performance of the league and we’ll have to build on that again if we’re going to have a chance of beating the Dubs.

“One thing in Tralee was we gave away too many frees. They’ve a great free taker Dean Rock who puts everything over so that’s something else we need to work on for Sunday.”

As for Fitzmaurice getting a little hung up on criticism of his team – the Kerry manager claiming a “complete lack of balance” when it came to comments about whatever cynical tactics Kerry might use compared to Dublin – none of it appears to matter to Enright. Whatever happened in Tralee that night wasn’t intentional.

“We don’t listen to what people write about us, we worry about performing on the pitch. Look, it was a really intense game, you wouldn’t expect anything less from the Kerry men or the Dublin men.

“And I don’t think the gap is that big. Obviously they’re very strong but the league final last year was very close until Aidan O’Mahony got sent off and they pulled away with the extra man. When they’ve 15 it’s hard enough.

“We were close enough to them in last year’s All-Ireland semi-final but again they pulled away in the end. For us it’s about being able to perform for 75 minutes so that’s what we’re working on.”