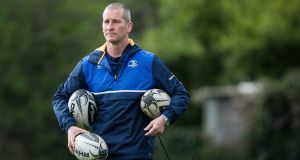 Leinster have re-signed their entire coaching ticket. Stuart Lancaster will remain for two more seasons as senior coach under Leo Cullen, who was reappointed head coach rather than the director of rugby title used by Ulster and Munster as Guy Easterby fulfills many of the off-field duties in his capacity as Head of Operations.

Interestingly, scrum coach John Fogarty also got a two year extension but backs coach Girvan Dempsey is believed to have only signed a one year deal.

However, Dempsey’s development as a home grown Irish coach appears to be valued on the same level as Munster’s Felix Jones and Racing 92’s Ronan O’Gara. The IRFU refused to confirm, but it is being reported that Dempsey, Jones and O’Gara will link up with Joe Schmidt’s Ireland for the June tour of the USA and Japan.

Securing Lancaster’s expertise - the 47 year old currently commutes between Dublin and his home in Leeds - for the current World Cup cycle is the most prized and perhaps expensive contract on a day when Leinster also announced 13 player deals to go with Jamie Heaslip and Devin Toner recently penning national contracts.

“I am here with positive thoughts about the next two years and although it (the contract) has not been finalised and confirmed, I am certainly not looking at other options,” said the former England coach last week. “There has been no ego involved with me being at Leinster as (head coach) Leo Cullen was very open-minded.”

Notable omissions from the newly contracted Leinster list are Mike Ross and Dominic Ryan. Since returning from injury, the 37 year old Ross has been unable to force his way ahead of Michael Bent as tighthead prop cover for Tadhg Furlong. Also, Leinster and UCD are currently switching 21 year old Andrew Porter from loose to tighthead prop.

Ryan is believed to be looking for a new club in England as Leinster’s backrow stocks are set to be continually replenished over the coming seasons.

Jack Conan and Heaslip will duel for the number eight jersey while Jordi Murphy is another to sign a new contract despite the serious knee injury sustained against the All Blacks last November.

Locks Mick Kearney and Ian Nagle have also been re-signed while 2016 Ireland under-20s captain James Ryan was recently promoted to the senior squad. Mike McCarthy is joining Narbonne in France while Hayden Triggs is also due to leave now that Scott Fardy, the 39-times capped Wallaby flanker, is taking up the one foreign second-row slot permitted by the IRFU.

Zane Kirchner is being replaced by the non-capped New Zealand wing James Lowe.