Another major own goal for the FAI 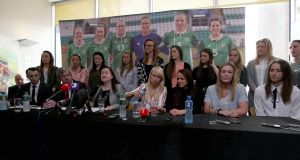 One of the more rib-tickling experiences to be had is watching the archive-mining series Reeling in the Years on RTÉ with anyone under 20ish and fielding their questions about life in Ireland in the decades immediately preceding their arrival on earth. Nothing stuns them more than learning we used to find it hard not to win the Eurovision, but other revelations befuddle them too.

“Why were all those women getting on a train to Belfast?”

When the 2017 Reeling in the Years pops up in a decade or so, that generation’s whippersnappers will, you’d hope, be similarly perplexed.

“Why were the Irish women’s team changing out of their tracksuits in airport toilets?”

“Because they had to hand them over so the underage teams could use them.”

Mind you, Kevin Kilbane revealed on Newstalk radio’s Off the Ball that in his day the fellas had to hand over their tracksuits too, so at least the Football Association of Ireland has been gender neutral when it comes to kit-stinginess.

Still, what you wouldn’t have paid to see Roy Keane being informed he had to go in to the airport jacks to denude himself of his gear, and the unfortunate FAI official tasked with passing on the instruction being impaled for his troubles.

The FAI probably felt a bit impaled itself on Tuesday after that press conference at Liberty Hall featuring 14 members of the Republic of Ireland’s women’s soccer squad, the association once again on the receiving end of less than positive publicity. The players, meanwhile, were on the receiving end of more attention than they have experienced in their entire careers.

The statement the FAI released afterwards, and the performance of its employees rolled out in the media to defend the association, confirmed it still didn’t quite get how deep that impaling wound was.

It’s not that many of those expressing their horror at the players’ revelations about their working conditions are passionate supporters of women’s football, or have ever turned up at one of the national team’s games, it’s that the disdain with which they have been treated just burned.

The greatest irony in it all was contained in that email they sent to the players last Saturday: “We would urge you to consider seriously, both individually and as a group, how your proposed actions could damage your club careers with club penalties for refusing to play international football, your international reputation as players and your responsibilities to the many young people who look up to you as role models.”

Silently tolerating their treatment would make them better role models for our kids, as opposed to ones who speak out, stand up for themselves and demand to be treated with some decency, regardless of the personal consequences? The FAI has a quare definition of role modelling.

As for those damaging consequences, that might account for some of the messages of support sent to the squad saluting their bravery – like the one from Katie Taylor, herself a former football international, to Emma Byrne: “Well done Emma. A long time coming. Incredible courage shown by you all. Fighting for future generations.”

That a woman who boxes for a living regards the public airing of the most modest of demands as “incredible courage” says something of how big a step speaking out is seen to be, in this case by someone involved at the elite level of Irish sport for over a decade.

But there’s strength in numbers, and public shaming can be a powerful enough weapon, as the United States women’s football and ice hockey teams proved in their recent battles with their masters over pay.

Sponsor-targeting is a useful tool these days too. The FAI lists 21 sponsors on its website and it’s hard to imagine any of them being overly chuffed with what was aired this week. So if anyone should consider seriously, both individually and as a group, their actions, it’s probably the FAI.

They’ve already occupied enough slots on Reeling in the Years, they won’t want to fill many more.