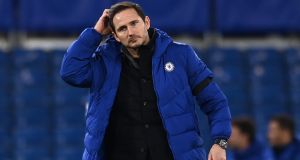 Manchester City are up to fifth in the Premier League, after they consigned Chelsea to a fourth league defeat in six matches at Stamford Bridge yesterday. Goals from Ilkay Gundogan, Phil Foden and Kevin De Bruyne meant the game was over as a contest after just 34 minutes, with the pressure now mounting on Chelsea boss Frank Lampard. And in his column this morning, Ken Early has suggested for the former Blues midfielder should look at himself rather than jumping to criticise his players. He writes: “Where are his landmark victories? Where is his player development? Where is Chelsea’s identity? Lampard’s second season has been the story of him failing to figure out how to get the best out of one of Europe’s strongest squads.” Elsewhere yesterday goals from James Maddison and Youri Tielemans gave Leicester City a 2-1 win away to Newcastle. Tonight, Southampton welcome Liverpool to St Mary’s (kick-off 8pm).

Three of the four provinces headed into the weekend’s derby matches unbeaten in the Pro14 this season, but now only Ulster’s record remains intact after their 15-10 win over Munster in a frozen Belfast on Saturday evening. Meanwhile Leinster’s 26-match winning run was brought to an end by an inspired Connacht performance at the RDS, with the men from the West running out impressive 35-24 winners. Ulster are now 10 points clear of Leinster in Conference A of the Pro14, with the two sides set to meet in Dublin on Friday night. And McFarland believes his side are capable of inflicting a second-straight defeat on the defending champions. He said: “Are we capable of winning down there? One hundred per cent. What it means is we have to be absolutely on the money, which is better than we were this week. But we knew that anyway. That’s exciting.”

7 Colin Farrell: ‘After 20 years of drinking the way I drank, the sober world is pretty scary’

18 Before you buy an electric vehicle, ask: Will I drive it enough to make it eco-friendly?

20 New to the Parish: Abdullah Afghan and Fatima Abdullah arrived from Afghanistan via Pakistan

23 Vaccination of ‘high risk’ citizens against Covid-19 to begin next week, Dáil hears

24 Covid-19: Face masks should not be compulsory for primary school pupils, Hiqa says

28 Irish Times view on the restless state of unionism

37 ‘My husband is unemployed. Where will he go if I leave him for my business partner?’

40 Moses Farrow: ‘I felt inherently like I was a bad kid. The abuse at home reinforced that’