Joanne O’Riordan: CAS on a hiding to nothing over Semenya controversy 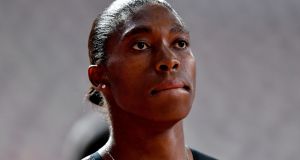 Caster Semenya: why does the testosterone levels ruling only exist for the races Semenya participates in, 800m and 1500m. Why are other races not included? Photograph: Noushad Thekkayil/EPA

It’s May 2019, and I think I’ve read the weirdest statement ever by CAS.

The Court of Arbitration for Sport concluded that while IAAF’s rule that forces athletes with higher testosterone levels to medically reduce their levels was discriminatory, such a rule was incredibly necessary to protect and not diminish female sports.

You can sort of understand it to a degree. The way Caster Semenya was portrayed made it seem like she was conquering everything and anything that came her way. Screw the competition, it’s up to them to catch up.

But after the landmark ruling a decent-sized proportion of women who follow female sports stars disagreed, with many saying it is incredibly wrong to force someone to take drugs to slow them down.

Many others believed why should 99 per cent of athletes suffer because of a once-in-a-lifetime athletic phenomenon. And thus, you find an incredible blurring of lines and outcries from extremists on all sides.

I think everyone on this planet can agree women and men should be separated when it comes to competitions. When all of these divisions came into place, the world had not heard, or had vocal activists, on gender, sex, divisions and identity, and I’m pretty sure nobody was thinking of those who were transitioning from one sex to the other.

Mix in the fact that nowadays definitions and terms are always changing, you now have the ticking timebomb in Caster Semenya.

Defining these two prominent categories have all been agreed upon, but the methods have yet to be satisfactory. From invasive testing to uncomfortable times when what was a woman was a hot topic, sex testing is a sort of moral and ethical conundrum for IAAF to this day.

Back in the day, women who excelled in their particular sport were routinely scrutinised for not being the ideal woman.

This was at a time when the concepts of equality and women’s liberation were still a decade away, and a female athlete was only acceptable if she conformed to the current cultural stereotype of femininity, which is sort of ironic considering the treatment Semenya is getting for not looking like a standard woman.

But the one thing about the ruling that leaves me, along with many others, scratching my head is why the testosterone levels ruling only exists for the races Semenya participates in, 800m and 1500m.

If it’s generally accepted that testosterone is the divider that proves an athlete is better, than why are other races not under the same scrutiny? Surely, if testosterone provides an advantage to Caster Semenya and other intersex athletes, why are they only getting an advantage only for one or two days a week?

Surely if you are destined to create a level playing field and protect the nature and fragility of fairness in sport, it can be unilaterally agreed that Semenya and intersex athletes and those with high testosterone levels should not be in sport at all.

Here’s the best part though – sport, just like life, is not fair. There is no way you can get the exact same group of people, be it male or female, together in one sporting event, and every single one of them is biologically, physically and psychologically the exact same. Sport, whether we like it or not, is not a level playing field.

Many people working in sport, from scholars to journalists to fans alike, can see the various inequalities in sport. Anyone can see that sport consists of broader forms of social inequality that are accepted, tolerated, and ignored. Even looking at sports institutions across the world, embedded are many inequalities of racism, classism, sexism, hegemonic masculinities, gender inequalities and nationalism.

The thing with sex testing is, it is just that. It’s a test to determine the femininity or masculinity of a woman. Sex testing has never been about actually testing for biological and genetic advantages. And if we looked into that type of testing, we’d have more debates.

Numerous basketball players have acromegaly, which is a condition responsible for excessive tallness, a clear advantage in basketball. Nobody complains when Giannis Antetokounmpo dunks on some poor point guard.

Even though sport is not fair and we could never get two people who are literally the same, sport, in a way, is about celebrating the freaks and genetically superior wonders to us mere normal humans.

Semenya may not race again under these new rules and maybe, when new research provides actual facts, history may or may not be kind to this ruling.

But, as Semenya tweeted on Thursday, we can laugh at her for being different, but maybe she and the rest of the world are laughing at us because we are different.

1 Seán O’Brien: Anger over my parents’ break-up never left me
2 Madness or defiance? The GAA is taking a huge gamble in staging Championships
3 Plenty of positives for Farrell as Ireland hit the ground running
4 The Offload: Outgoing Tom Grace will be missed by IRFU
5 Will Connors chops his way to the front of Ireland’s openside queue
Real news has value SUBSCRIBE
Here is your handy guide to sport on television this week