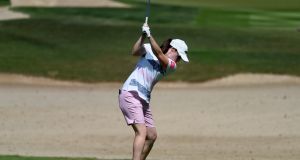 Leona Maguire and Stephanie Meadow will both compete at the US Women’s Open in Charlston. Photo: Tom Dulat/Getty Images

Leona Maguire and Stephanie Meadow have both qualified for the US Women’s Open which gets underway at the Country Club of Charleston in South Carolina at the end of this month.

Maguire – who finished fifth in the Moonlight Classic in Dubai last Friday – put together rounds of 66 and 68 in Atlanta to finish second and secure one of just two spots that were on offer.

The Cavan golfer remained bogey-free for her 36 holes of qualifying as she continues the rich vein of form which saw her shoot a course record 64 in the opening round in Dubai last week.

The 24-year-old is back stateside this weekend to compete on the Symetra Tour as she attempts to secure an LPGA Tour card. The US Women’s Open gets underway on May 30th and will be the Cavan native’s first Major as a professional. She has previously played the event as an amateur in 2016 and 2017 but missed the cut on both occasions.

And she will be joined in the field by fellow Irish player Meadow who qualified with ease in Arizona thanks to rounds of 67 and 71 to lead the field. Meadow made her debut in the US Women’s Open five years ago, producing a memorable performance to finish third.