Ireland must stand up to England’s bullies; Stephen Kenny can end year on a high 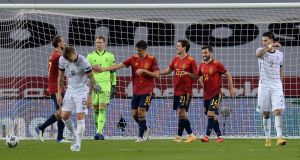 It’s been coming down the line probably for quite a while now but the news that James Ryan will captain Ireland against England at Twickenham on Saturday may have come earlier in the player’s career than some had expected. However, if ever there was a natural born leader, Ryan fits the bill. “At St Michael’s, Ryan captained every side from their under-13s up, be it Minor Cup, Junior Cup or Senior Cup. He also captained the Leinster Schools, Leinster Under-19s, Ireland Schools, Ireland Under-19s, Leinster Under-20s and Irish Under-20s,” writes Gerry Thornley. Indeed the Leinster man probably couldn’t find a tougher first match to lead the team and this morning Gordon D’Arcy writes that Ireland must be smarter to stand up to England’s bullies. Even with new young players in the team a bad day or mistakes are allows but softness is not an option, he writes. One player who will certainly bring heavy physicality in the white jersey is Sam Underhill and this morning the new Sports Journalist of the Year (as awarded last night) Johnny Watterson looks at just what the England flanker brings to the game.

On to soccer and Stephen Kenny is looking to end a difficult 2020 on a high this evening as Ireland meet Bulgaria in the Nations League, needing to avoid defeat to ensure they are not relegated into League C. Kenny’s record so far reads on draw and six losses since taking over the job with a healthy dose of very bad luck along the way but, without even a goal in six games, the Dubliner will be desperate to get something out of tonight’s match, even with a depleted squad. The manager has been without 10 players on different occasions due to Covid-19 positive tests or close contacts of positive tests and the toll is taking its strain on the camp, as Conor Hourihane said yesterday. In last night’s Nations League action Spain stunned Germany with a 6-0 hammering in Seville which leaves the 2014 World Cup champions and manager Joachim Low reeling.

1 Sinn Féin TD Brian Stanley apologises for ‘inappropriate’ tweet
2 Government may yet face hardest call on Covid-19 restrictions
3 Maureen Dowd: A brother’s lament for Donald Trump
4 Coronavirus: Donnelly warns State entering ‘uncharted territory’
5 Ireland 23 Georgia 10: How the Irish players rated
6 Older men’s fixation with younger women really boils my kidneys
7 Late Late Toy Show duet with musical hero ‘absolutely mad’ says delighted teen
8 400 – yes, 400! – Irish retailers for all your online Christmas shopping
9 Sordid murder of hurling brothers still resonates in south Galway
10 Ireland’s teenage pariahs: ‘We are really at breaking point now’
11 Michael J Fox: ‘In the wheelchair, I’m luggage. No one listens to luggage’
12 Almost 730 consultant posts vacant, say doctors
13 Viggo Mortensen: It ‘felt awkward’ replacing Stuart Townsend in Lord of the Rings
14 Majority of Dublin’s Airbnb-style lets return to long-term market
15 OECD unclear how ‘rigid’ Leaving Cert prepares students for future
16 Ireland’s autumn of discontent continues with abysmal Georgia showing
17 Almost 7,500 people avail of ‘Man in a Van’ grant
18 TV guide: 22 of the best shows to watch this week
19 Greek potatoes: Incredible served with lamb chops and tzatziki
20 Northern Irish businesses ‘horribly exposed’ by Brexit ‘mess’
21 Keanu Reeves: ‘Grief and loss are things that don’t ever go away’
22 Gardaí investigate George Gibney over abuse allegations
23 Vaccine rollout could begin early in New Year, says Donnelly
24 'It just doesn’t feel safe': The restaurants that will not reopen in 2020
25 Life under Level 3: What stays open and where can I travel?
26 Nicky English: No surprise that Limerick and Waterford in final
27 No fireworks but Limerick get the job done against Galway
28 ‘If you apply for a driving test now, you might get one by June’
29 Best books for Christmas 2020: Fiction, biography, sport and kids’ books
30 Ireland grind their way to grisly win over Georgia
31 ‘It’s finally got to rural America’: Covid-19 surges in the Dakotas
32 Mind that cat – and its impact on wildlife
33 Fintan O’Toole: To counter vaccine sceptics, we must understand them
34 John Boyega’s ‘Jedi’ copper makes a lone stand against racism
35 Irish youth to lead global study into impact of Covid-19 on young people
36 How to cook celeriac the easy way – and the best way
37 John Belushi: ‘It’s hard to watch him and not smell the alcohol and drugs’
38 Fans put Lennon under pressure as Celtic knocked out of league
39 Two outstanding Brexit issues left, says British foreign secretary
40 Helena Bonham Carter: ‘People choose to sleep with powerful people. I got two children out of it’
Real news has value SUBSCRIBE