Concern about contracting virus on international duty an additional strain 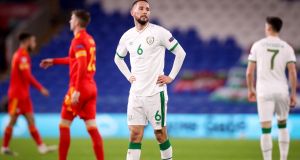 Conor Hourihane: “None of it’s the same at the minute; the supporters, the intensity, the energy around stadiums isn’t there. You have to make do as best we can but there is not the same emotional energy, passion.” Photograph: Tommy Dickson/Inpho

Amid the chaos caused by coronavirus around the Irish and other international squads, Conor Hourihane admits the pandemic has been mentally challenging for players both on and off the pitch with the Aston Villa midfielder hoping that positive news on the vaccine front means life, and football, might be back to something approaching normal by the time the World Cup qualifiers get under way next spring.

The 29-year-old has more cause for concern than most. Having lost someone himself to Covid-19, his partner is now expecting a child and so he is anxious not to bring the virus home from a camp that has suffered more than its share of cases.

“It’s not easy,” he says. “We’re all worried about results, performances and goals and whatever – and yes that’s what we all want – but, listen, I’ve had a family issue with Covid, somebody unfortunately passing away. My partner is pregnant as well so I don’t want to be taking anything back to her.

“So there are a lot of factors. People won’t know what’s going on in other people’s lives. We’re all wanting results and to win games but sometimes there are bigger things out there in life. This pandemic is definitely bigger than a couple of goals and a couple of results. But fingers crossed we’ll get a good performance on Wednesday.”

Hourihane is honest enough to acknowledge the contradictions involved. On the one hand he is, he says, slightly surprised that clubs haven’t done more to prevent their players coming away on international duty in the current window given of the risks involved. On the other, even with his own circumstances right now, he insists there was no way that he was pulling out of an Ireland squad off his own bat.

“I suppose that’s a little bit of a selfish piece of mind that I have as an athlete,” he says. “Hopefully, I won’t bring anything home and we do get tested regularly, which is important. And I do feel safe but you have to be a little bit selfish in this game and I was never going to pull out.

“I love playing for Ireland,” he continues. “It’s a very short career, it flashes by you in the blink of an eye, so any call-up I get, I’ll always be here.”

That said, he says... “I did think that maybe it all would have been more of a factor for this trip. In the October meet-up there were a lot of positives and issues going on with pull-outs and positive tests and people going back to clubs and not being able to play, and all the rest of it.

“So I thought this November trip might get put into jeopardy and there may be a conversation around that, where clubs wouldn’t let players go. But now that the November trip has cracked on and we’re here, then hopefully come March, there might be light at the end of the tunnel. I think after this trip, I don’t see that being an issue really.”

That slightly tentative confidence is based on a widespread hope, as much as any expectation, that vaccines could be available by then and the Corkman has certainly been encouraged by the reports over the past week or so of encouraging results in trials.

“Yeah, hearing about the vaccine is massive for the mental health side of things. That’s definitely a great little bit of light at the end of the tunnel. It’s fantastic to hear. It gives everyone a little bit of a lift.

“By the sounds of it, the vaccine is going to be massive part of getting out of this mess, so the sooner that gets dripped into communities, the better. We all want to see the back of Covid, I know loads and loads of people are struggling with all of it. Any bit of good news right now – when it all seems to be doom and gloom – is important.”

In that sort of context, the football strikes many as insignificant but Hourihane inevitably believes sport has a positive part to play and is just sorry that nothing is what it should be.

“It’s very disheartening,” he admits, “but you try and get on with it as best you can. Football and life, the GAA games I’ve watched, none of it’s the same at the minute; the supporters, the intensity, the energy around stadiums isn’t there at the minute. You have to make do as best we can but there is not the same emotional energy, passion... all those words you think of when fans are there.

“But that’s just life at the moment. We’ve been hit hard by it over the last three trips and it hasn’t been easy. But hopefully we’ll get a positive result and then come March we’ll be back to a little bit of normality. Then, fingers crossed, we can kick on from there.”