Masters Digest: Quiet Augusta a new experience for all

Hatton commits to Horan; Immelman heads for TV; are the numbers aligning for McIlroy? 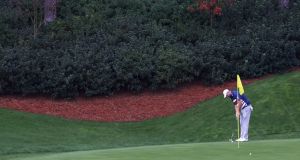 Marc Leishman putts on the 13th green during a practice round prior to the Masters at Augusta National Golf Club. Photo: Rob Carr/Getty Images

It’s not just Tiger Woods or Rory McIlroy who have struggled to fuel their energy since the PGA Tour’s resumption, add Marc Leishman to the list.

The big-hitting Australian was set for a stellar year – with a win in the Farmers Insurance Open and a runner-up finish at Bay Hill – when the coronavirus pandemic stopped him in his tracks. Since returning to the fairways, Leishman has suffered five missed cuts in 12 events and failed to even threaten getting a top-10. His best finish was tied-28th at the Tour Championship where there were only 29 players in the field.

“I tend to feed off the crowds a lot even though it might not look like it. I play better when it’s high energy and pressure and there’s been no energy, no pressure,” said the Aussie, who hopes that a recent visit from Dennis McDade, his Australian-based coach, has managed to solve a set-up problem that was tensing up his swing.

“I haven’t really hit a shot that’s mattered since March in the context of winning or losing a tournament. Golf hasn’t been very fun for me the way I’ve been hitting it lately . . . but just playing Augusta National gets your energy, so hopefully this can be a big turning point for me. Guys have won after missing cuts or playing poorly for months on end, so hopefully I can be another one to add to the list.”

Leishman has two top-10s in seven previous Masters appearances, his best being a tied-fourth finish in 2013 when he held the first round lead.

Originally signed to the company last year, Hatton – up to world number nine and winner of last month’s BMW PGA at Wentworth – has committed to a longer tie-up with the agency which primarily focuses on attracting young up-and-coming players and numbers Leona Maguire among its stable of golfers.

“We’re so proud to re-sign Tyrrell, his golf this past 18 months has been incredible. To not only witness him make his breakthrough in America (in winning the Arnold Palmer Invitational) but to also watch him win the European Tour’s flagship (at Wentworth) was something really special. We’re just so delighted and proud to be on that journey with him,” said Horan, an avid golfer who is a member of Mullingar Golf Club.

Immelman heads for the studio instead of the tee

South Africa Trevor Immelman has opted to bounce his way into a television commentary booth rather than tackling the superfast Augusta National greens this year.

Immelman, winner of the 2008 Masters, has taken up a role as an analyst with American television network CBS where he will have another former champion Nick Faldo as a co-commentator.

The South African missed the cut each year from 2014 to 2018 but made the weekend a year ago, ultimately finishing in tied-51st. “Do I regret not playing?” wondered Immelman. “No, not really. Well, I do a little . . . maybe five per cent.”

Angel Cabrera was another past champion to be included in the tournament invitees as “non-competing,” with the Argentine player, winner in 2009, missing the event for the first time since 2000.

What’s that they say about age? It’s just a number. Right!

In terms of the Masters, it is interesting to note that the average age of the champion has been . . . . 32.

Which leaves just one problem – there are no players in the field who are, well, actually 32.

If you want to get closest in age? Well, that would be a certain Rory McIlroy who is 31.

26: Jon Rahm knows how to grab the spotlight . . . and the Spaniard celebrated his 26th birthday in style during Tuesday’s practice round with a hole-in-one on the 16th hole, where he skimmed the ball across the pond onto the green and into the hole.

“Marinated ribs, I feel like players of all nationalities would love that and I would of course cook them in the Korean style” – Sung-jae Im on what he would have on his Champion’s Dinner menu if he were to win the tournament.

1 Keith Duggan: Through the glories and the disgraces, we were all Maradona addicts
2 ‘God is dead’: The world’s front pages remember Diego Maradona
3 Rugby Stats: Blame game at lineout time is on the whole team
4 GAA Statistics: Can Cavan and Thomas Galligan beat Dublin with the long kickout?
5 Andy Farrell to delve deeper into Irish squad for team to play Georgia
Real news has value SUBSCRIBE

‘God is dead’: The world’s front pages remember Diego Maradona 10:40
Diego Maradona dies aged 60; can Cavan’s kickouts do for the Dubs? 07:48
Joanne O’Riordan: Peamount show their pedigree as they prove themselves again 06:37
Fear won’t be a factor as Waterford get their licence to thrill 06:00
Limerick’s O’Donoghue wishes it was comrades all on the road to Croke Park 06:36
Here is your handy guide to sport on television this week