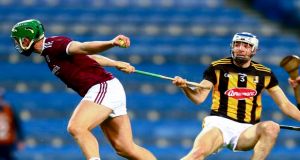 Cynical fouling became a live issue over the weekend with the foul on Niall Burke by Kilkenny’s Huw Lawlor, who dragged out of the Galway forward’s hurl, as he went in on goal. Photograph: Inpho

By the end of next weekend we’ll know the last four counties in contention for the Liam MacCarthy or as we know it this year, the All-Ireland hurtling championship.

Within its squeezed schedules, weekly flashing by, the results send the field one way and then another. Just a few days ago, evidence appeared to point to a Limerick-Galway final but fixtures qualify what’s gone before and their outcomes create fresh assumptions.

Did Clare put Galway’s win over Wexford in a new context? Is there an organic development as counties play?

There’s an obvious dividend for playing in competitive matches. Kilkenny and Waterford had to work harder for the provincial final places than either Limerick or Galway and both did better than expected.

Even Clare, whose narrow win – albeit reduced to 14 for half the time – over Laois in the first qualifier round didn’t exactly look like a credential, proved much too good for a Wexford team that along with Laois were the only ones not to win a match in this year’s championship.

Scheduling plays a role. The “third-match syndrome” from the provincial round-robins of 2018 and 2019 has raised its head with the only two counties who had to play three successive weeks, Dublin and Cork, both losing their final engagement.

Maybe significantly, whoever wins the All-Ireland quarter-finals on Saturday will have their third successive weekend in the semi-finals and if Clare come through, it will be a fourth.

The more appealing rhythms of getting a fortnight’s break between matches continues for Limerick and Kilkenny but in the roundabout voyage of discovery taken by this season, a tangible benefit for winning the provincial championship has at last been provided.

It’s not the big calendar gap of normal years, which hasn’t always worked out to the advantage of the winners in Leinster and Munster, but it’s some welcome respite from heavy pitches and dire weather.

Like so much else of what has come to pass this year, whatever unfairness arises in consequence can’t be helped and there is broadly accepted merit in the view that we’re lucky to have anything.

There has been adequate flagging of the problem of cynical fouling in hurling as well as the publication of proposed solutions so it’s hardly a reasonable argument to say that nothing can be done about it.

The issue again became live over the weekend with the foul on Niall Burke by Kilkenny’s Huw Lawlor, who dragged out of the Galway forward’s hurl, as he went in on goal. To add insult to injury, after Burke got the ball to Brian Concannon, who put it in the net, the foul had already been whistled by referee Fergal Horgan so there was no advantage played.

It wasn’t as if we were waiting for Saturday’s Leinster final to confirm the problem.

In the very first of the championship, Dublin’s Danny Sutcliffe stuck out his hurl to trip Paddy Purcell at a time when Laois were mounting a bit of a comeback.

Yet when David Hassan, chair of the Standing Committee on the Playing Rules, warned congress nearly nine months ago that not to confront cynical play in hurling would effectively be to endorse it, he was completely ignored.

The committee had analysed 20 high-profile hurling matches between 2017 and ’19 and found that 48 per cent of fouls involved “cynical or disruptive” conduct.

“The presence of cynical fouling in hurling is well accepted,” he told congress. “Knowing that and consciously deciding to do nothing is contradictory. Central Council asked, ‘what sort of games do we want?’ and embraced seven principles. I’d bring delegates’ attention to these two: one, that it shouldn’t pay to foul and two, that we should reward skilful players.

“I accept that there is a spectrum of opinion on this but we should conflate what people want with what the game needs.”

He was met with the usual refusal to engage with the substantive argument and fatuous claims that the game – “the greatest in the world,” as is the usual formulation when hurling’s shortcomings come under a spotlight – wasn’t broken so why try to fix it?

The banality of the “debate” later prompted a rebuke from GAA president John Horan.

It is true however that as a sanction the black card has its limitations and they were in full view, again to Galway’s disadvantage, in the Connacht football final on Sunday when Seán Kelly was tumbled to the ground by Mayo’s Eoghan McLaughlin in injury time when a goal opportunity presented itself.

In an interview with The Irish Times last January, All-Ireland football referee David Gough made the following point

“I may be the only one still banging on about this but I still have an issue with denying a team or player a scoring opportunity, particularly within the 30 – or 20m line. Awarding a black card and free kick isn’t adequate. The scoring opportunity should be given back; otherwise it still pays to foul.

“If you were to say that a black card within the 20m line results in being ordered off the field and a penalty, we’re not going to see as many incidents of deliberate pull-downs, deliberate trips or body collides intended to stop scoring opportunities. We’re at a stage now in intercounty football that it’s ‘win at all costs’ – doing whatever you need to do, regardless of rules, to ensure your team wins.

“The GAA needs to counter this by saying that we equally will do anything we need to do, through the rules, to make sure that it doesn’t pay to foul.”

Nobody would wish more on the GAA’s plate at this stage of what has been the association’s most difficult year in nearly a century but this issue will still be with us in 2021.