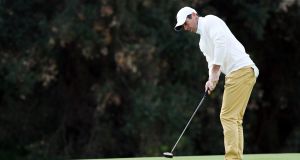 Rory McIlroy putts on the 12th hole during the first round of the Genesis Invitational in Pacific Palisades, California. Photo: Harry How/Getty Images

Still a week to go before Ireland take on England for the Triple Crown but preparations are ramping up in Cork. This morning Gerry Thornley writes that Ireland’s midfield options are looking slimmer with Garry Ringrose not expected to recover in time while Will Addison is still battling a troublesome calf. The meeting between the sides will pit Andy Farrell against his son Owen for the first time with Farrell senior as head coach. The Ireland coach says that the dynamic is a bit strange but it’s strictly professional with both men used to it at this stage. Don’t forget that you can keep up to date with all of the Six Nations action including previews, reports, analysis, interviews, features, news and more on our dedicated 2020 Six Nations website.

Staying with rugby but moving to the schools side of things and former IRFU referee director Owen Doyle writes this morning about his recent experience at schools rugby and how there is a toxic atmosphere building up around it. “It is an intimidating place, the language is foul and the verbal abuse of match officials and of opposing players is appalling,” he writes. “The throwing-in hooker, who is but a couple of metres away, gets a particularly torrid time. I also heard some comments that could only be described as on the cusp of racial abuse. The use of flares is both frightening and dangerous.”

1 Harris agrees with PSNI that army council still oversees both Sinn Féin and IRA
2 Drug dealer loses codes for €53.6m bitcoin accounts
3 A Dad with brain cancer: I was given 18 months to live, it put things into perspective
4 MV Alta: The unmanned voyage of the Ballycotton ‘ghost ship’
5 Ben Affleck: ‘It took me a long time to admit that I am an alcoholic’
6 Jogger injured by galloping horse could face substantial legal bill
7 Derry Girls’ blackboard goes on display as a museum piece
8 The close links between Sinn Féin and IRA untangled
9 ‘How can we torment a bunch of millennial snowflakes and get away with it?’
10 Varadkar says any Fine Gael deal would have to recognise strength of its vote
11 ‘Manchester United are lucky to have you’: Klopp responds to Donegal schoolboy’s letter
12 Stephen Collins: Reluctance of Fine Gael and Fianna Fáil to govern understandable
13 Serving fireman charged with possessing cocaine at Tipperary fire station
14 Steve Coogan says ‘my Irish passport will be arriving shortly’
15 Knock gets visit from world’s largest passenger plane
16 Six Nations: Ireland v England all you need to know guide
17 L’Ecrivain, Derry Clarke’s Michelin-starred Dublin restaurant, to close after 31 years
18 A maverick taking on the Irish whiskey establishment
19 Fears of flooding increase as wind and rain warning issued
20 Iain Henderson ruled out of Ireland’s Twickenham visit
21 Why Sweden ditched its negative rate experiment
22 Labour having ‘existential crisis’, Aodhán Ó Riordáin says
23 Liam Toland: Larmour can distract England while others flourish
24 High Court quashes permission for Ronan dockland tower
25 Man found guilty of raping woman thanks to partly smoked cigarette loses appeal
26 United greats in attendance as club hero Gregg laid to rest
27 Chance encounter with gardaí unmasked bitcoin millionaire drug dealer
28 Can the Merrion Street-Whitehall axis survive Brexit?
29 Review: prepare to flip over Samsung’s new folding phone
30 U2’s €1bn ticket sales makes Dublin band top live acts of the decade
31 Eddie Jones: back three will deal with Irish aerial threat
32 Fianna Fáil and Sinn Féin leaders round on each other in bitter Dáil clash
33 Would you kill one person to save five? Depends if you’re a millennial or not
34 Irish cultural exports helped pave the way for economic growth
35 Use of CCTV footage in disciplinary process breached data rights
36 We carry these wounds with us throughout our lives
37 Ukraine minister joins China evacuees in sanatorium to calm panic over coronavirus
38 Kingspan amasses €750m war chest to fund acquisitions
39 David Brady says he's witnessed illegal payments of GAA managers
40 Double marriage proposals for newly-commissioned army officers in Dublin Castle
Real news has value SUBSCRIBE