Antrim man hoping to change the face of Ugandan soccer 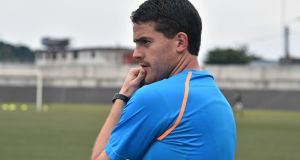 From the moment Johnny McKinstry began his coaching badges, his journey has been one like no other in his trade. For it’s one that has roots in Lisburn and has only recently pulled up in Kampala, the capital city of Uganda.

The route between the two has hardly been conventional, the 34-year-old setting foot in nearly 50 different countries and being based everywhere from the cosmopolitan setting of New York to the lesser-known environs of Bangladesh. After landing a coaching job in his mid-20s with New York Red Bulls, he moved to Sierra Leone in west Africa, helping to establish a football academy before graduating to become the country’s national team manager. From there he moved inland to Rwanda, on to the Lithuanian and Bangladeshi club scenes, before arriving in the Ugandan capital last autumn to become their national team manager. Already, despite only managing the east African nation for 10 games, his record has been impressive, his tenure bringing nine wins and one draw and culminating in Cecafa Cup glory, an east African tournament, in December.

But, like all managers, his role extends beyond manning the sideline for crucial international fixtures.

A normal day, he explains, involves a lot of administration work and keeping in touch with up to 40 players right across the globe.

“It’s a little bit different with Michael [O’Neill] and Mick [McCarthy] with the two teams back home, as 95-98 per cent of the players are playing in England,” he says.

Therefore, much of his work is done through Wyscout, an online scouting platform, or at local Uganda Premier League games – though there is a budget to travel when required.

“For example, we have six players playing in the Egyptian Premier League. So if there is an opportunity to go and see three or four of those games over the course of a week, where you might be able to watch a number of those players, then we’re able to go and do that.

“After I was back in Ireland over Christmas, I was in England for the first week of the new year, catching up with various Ugandan players and also players who are eligible to play for Uganda.”

For many, the mere mention of some of the aforementioned countries harbours fears, partly deriving from what may be viewed as familiarity through the negativity of the news cycle. Even Uganda has developed a reputation, with the Irish Department of Foreign Affairs website bringing attention to the frequency of political demonstrations in the country, as well as car accidents, and terrorism and kidnapping incidents. Nonetheless, while the Lisburn native acknowledges the various threats, he also draws a poignant parallel with a familiar situation back home.

“Could you imagine what you’ve just described written on another department of foreign affairs website about Northern Ireland?

“What I’ve found over the years is what you read in the media and online about places is not really what a place is. Unfortunately, there’s a reasonable portion of our media that loves to focus on the negative side. Yes, there may be incidents happening in certain places but that very rarely is the story of a country.”

So, that being the case, the young manager is happy to call Uganda his home, for now. Coming from a motorsports background – McKinstry Racing has been ubiquitous in the sport for decades – he probably never imagined he would be preparing coaching sessions and scouting missions from an office in Kampala at this stage of his life. Yet, here he is, showing few signs of slowing down and already boasting a perceptible connection with the country and its people.

“Football is the thing that binds everything in Uganda. If I were to walk out of my house in the morning I couldn’t go two minutes without seeing somebody in a Ugandan football shirt.

“And the Ugandan weather is generally always in the 20s. When you’ve been somewhere like Bangladesh where it’s 41-42 degrees for a large part of the year, 27-28 is idyllic.

“It’s been very good for the months that I’ve been here – long may it continue.”

1 ‘Manchester United are lucky to have you’: Klopp responds to Donegal schoolboy’s letter
2 Six Nations: Ireland v England all you need to know guide
3 United greats in attendance as club hero Gregg laid to rest
4 Iain Henderson ruled out of Ireland’s Twickenham visit
5 Liam Toland: Larmour can distract England while others flourish
Real news has value SUBSCRIBE
Crossword Get access to over 6,000 interactive crosswords