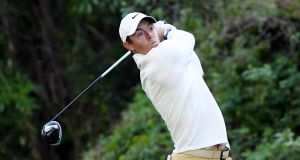 Rory McIlroy drives from the 12th tee during the first round of the Genesis Invitational at Pacific Palisades in California. Photograph: Harry How/Getty Images

Two eagles in the space of three holes will get the job done for most, and Rory McIlroy overpowered two Par 5s mid-round – eagling the 17th (his eighth) and then replicating the feat two holes later on the first – to muscle his way into the mix from the get-go with an opening round 69, three under par, in the Genesis Invitational at Riviera Country Club in Los Angeles.

Although it was American Matt Kuchar who shot the lights out with a 64 to assume the first round lead, it was McIlroy who showcased the X-factor with a brace of eagles that had the 30-year-old Northern Irishman, playing as number one in the world for the first time since September 2015, very much in contention.

McIlroy endured a scrappy start to his round, where he relied on his short game prowess to save par after par, which was highlighted by another par-saving putt on the 16th. “I missed a couple of short ones early on and then went through a stretch of missing a lot of greens. I got it up and down on 13, 14, 15, 16, – nice not to drop any shots there.

“There are no easy putts on this golf course, they all have a bit of swing to them. I feel that part of my game helps me stay in rounds and it is putts like that [on 16] that give you a little momentum going to the next tee box,” said McIlroy.

So it was that McIlroy effectively kick-started his round in style on the Par-5 17th where he hit a 3-wood approach of 290 yards to 35 feet and rolled in the eagle putt. “You’re just trying to lag those ones up and it’s a bonus when it drops,” he conceded.

Then, on the Par-5 first, McIlroy again showed how length off the tee can provide a huge advantage. He only had a 7-iron approach into the green for his second shot and rolled in the 10 footer for his second eagle, adding a further birdie on the fifth, another Par 5, to sign for a 69 in only his second tournament appearance of the year.

McIlroy, tied-third on his only previous outing of 2020 in the Farmers Insurance Open last month, admitted he had slightly tweaked his grip in the interim.

“I have been working on a couple of things over the past couple of weeks since Torrey Pines. There was some stuff I saw in my swing there I was trying to get away from. I weakened my left-hand grip a little bit again, it was getting a little strong, just to neutralise the ball flight a bit. That’s good, I am feeling like I can release the clubhead and the ball is not going to go left.”

Tournament host Tiger Woods had little time to fine tune his game ahead of the event but that did not stop him from making a hot start with an eagle at the first hole.

Woods, seeking a record 83rd PGA Tour victory, was delighted with the quality of his play on the front nine but was a little untidy coming home, dropping a couple of shots for a two-under-par 69 that saw him trail Kuchar by five.

Woods said he had spent limited time on the practice range due to his commitments as tournament host.

“Got off to a nice start on the front nine. Just didn’t hit any good shots on the back nine,” he told reporters.

“I haven’t had a whole lot of time to practice this week. I’ve been a little busy. First time I saw the range was yesterday for about 10 minutes warming up for the pro-am.”

Kuchar moved to the top of the leaderboard with a bogey-free round of 64 that featured seven birdies. “It is one of the toughest tests in golf, but the weather is beautiful and the course was playing great. This is one of those places, tops on everyone’s list. It has stood the test of time,” said Kuchar, winner of the Singapore Open last month.