The simple twist of fate that still drives Brian Fenton on 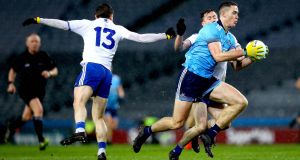 The plan was to keep playing with Raheny and maybe someday win a county title. Impossible as it is now to imagine Brian Fenton not having a football career with Dublin no one remains more acutely aware of this than himself, and for good reason.

It’s a story he’s told before, the day Fenton was sure his chance was gone, only it gets better with every passing season, especially as he’s coming up on six of them now without once losing a senior championship match. Better still it’s the same force and motivation that drives him to keep on winning and refuse to lay claim on defeat.

The latest evidence came in Croke Park last Saturday evening, when in their third league match under new manager Dessie Farrell, Dublin trailed Monaghan by 1-9 to 0-3 at half-time, were still six points down going into added time, only to level it up at 1-15 apiece.

“It certainly wasn’t talked about, ‘let’s do this for Dessie’, it’s more for us,” Fenton explains, gently avoiding cliche and certainly any gobbledygook. “You’re looking around the dressingroom at half-time and you’re almost embarrassed. People have come to watch you. It’s a crap day, Hill 16 is half full, your family is there. You have the likes of James McCarthy in the dressingroom staring you down. You’re saying ‘right, I better shape up in this half.’

“For me, I don’t know whether it’s a personal thing or a chip on the shoulder, but you never want to be beaten. Or certainly not lie down. It’s more just a pride thing. Challenging each other and being competitive. Then the stats – who got more tackles? Who got the highest GPS? Who put it in in the second half? Who stood up?

“Because I know in sport, successful teams die off. And it may happen, but hopefully not. Because there’s a desire in our dressingroom that goes beyond awards and medals. It’s just so competitive.”

He’s explained that before too, how the Dublin minor team in 2011 was so competitive Fenton wasn’t considered good enough to make it (they lost that year’s All-Ireland final, before winning in 2012); then minor manager Dessie Farrell told him as much.

“Oh yeah, minor is everything at that age. Definitely, I thought I was gone. Not that I wouldn’t play on with the club, but that county was maybe beyond me. I was on it [the minor panel] around January, then Dessie sort of told me. We had this squad game down in Cork, they brought like a panel of 50, and the Bs more or less played say on the Saturday evening, and the As on the Sunday morning. I was Bs on the Saturday evening and I sort of knew myself. I remember leaving that conversation bawling my eyes out, like. I was more or less told it’s not going to happen.”

Part of the explanation for that, Fenton adds, is that he was a relatively slow developer: “I was small until about fifth year, was going into the Institute [of Education] in Leeson Street at the time and I was convinced it was the heavy bag in and out of school, this sort of weight training I was doing. It was around my Leaving Cert time going into fresher’s football, I was skinny, but I took a stretch around then. But I remember even that minor with the club I was still so small, and moved out of the midfield to the half-forwards. So just kept playing away, got an injury, but took the stretch and filled out a little bit.”

With that came the simple twist of fate: Fenton made the Dublin under-21 panel in 2014, only not the starting team, until the All-Ireland semi-final against Cavan, when midfielder Shane Carthy, man-of-the-match in the Leinster final win over Meath, opted out for mental health reasons.

“I was back in the squad two weeks, then my mam passed away, so I was just dealing with everything, and only got on in the All-Ireland 21 semi-final. Shane Carthy that was the beginning of his depression, and he had been lording it all that competition, and I was next man up. It can be a very difficult subject to broach but Shane is very open about it, to be fair to him.

“I’ve slagged him [Dessie] a bit on this, but I haven’t said it to his face. I remember pinning Dessie out in that corridor in Parnell Park [saying] ‘Dessie, I’m f***ing playing well.’ Well, I was very timid at that time, so I was ‘please, Dessie.’ He gave classic manager sort of answers – ‘Stick with it’, ‘you might get a break’. Then everything just unravelled and I was in. Incredible how the sequence of events happened – and now he’s senior manager. It’s deadly.

Five senior All-Irelands in a row later, four All Stars, plus the 2018 Footballer of the Year award, Fenton turns 27 next month, and in May it will be six years since he made his championship debut in the win over Longford. He hasn’t lost a championship match since. Explain that if you please.

“Don’t get me wrong, I’ve been very lucky. But yeah, I’ve a couple of soppy stories to tell too. But when you got back in that bubble and back in the gym and you’re doing your strength testing. What was I last year? . . . right, let’s go . . . let’s get better.

“I’d hate for Ciarán Kilkenny to beat me in distance or Ciarán to beat me in tackles. It’s just the competitive nature among us. That keeps driving us. And I think Dessie coming in has brought new life to it. There’s just a buzz. When the players are together, it’s so special, an energy off each other. You’re driving each other.”