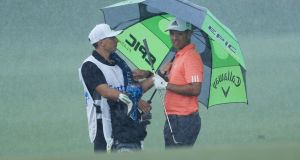 Leader Xander Schauffele and caddie Austin Kaiser during the second round in Hawaii. Photograph: Sam Greenwood/Getty

Xander Schauffele sank his fifth birdie of the day on the 18th hole to take a one stroke lead during a wet and windy second round at the Sentry Tournament of Champions in Kapalua, Hawaii on Friday.

The 26-year-old American fired his second bogey-free round of the tournament to keep his hopes of a title defense alive amid ever-changing weather conditions at the oceanside course.

“This is rain and wind that we don’t really play too often in but fortunately it’s kind of warm,” Schauffele said after his second round 68 to sit nine-under par for the tournament.

“It was an interesting day. I wasn’t thinking about my score because I was trying to stay as dry and warm as possible.”

Graeme McDowell was much improved on Friday, as he crept up the leaderboard with a second round of 69, which included five birdies a single dropped shot.

However the round of the day belonged to another past champion, American Patrick Reed, who mixed eight birdies with a bogey for a seven-under-par 66 and a share of second place with the overnight leader Joaquin Niemann of Chile.

Reed, the tournament’s 2015 champion, entered the first PGA event of the year after two disappointing performances at the end of 2019.

He was assessed a two-stroke penalty at the Hero World Challenge in the Bahamas in early December for appearing to deliberately improve his lie in a bunker and ultimately finished in third place.

At last month’s Presidents Cup at Royal Melbourne he posted a disappointing 1-3-0 record as a member of the winning American side but looked on the bright side of his experience in Australia.

“Any time you can go out and play for your country and play for others it means a lot, especially to me,” said Reed, who has also represented the United States at Ryder Cup competitions and is nicknamed Captain America.

The wind is forecast to die down somewhat at the Plantation Course for round three on Saturday.

Collated second round scores & totals in the Sentry Tournament of Champions (USA unless stated, par 73):