US fight back to leave Presidents Cup in the balance 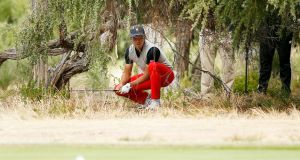 Rickie Fowler of the United States team plays a shot from the rough on the 18th hole during Saturday afternoon foursomes matches on day three of the 2019 Presidents Cup at Royal Melbourne Golf Course . Photo: Darrian Traynor/Getty Images

The United States roared back into contention at the Presidents Cup on Saturday as they dominated the Internationals in the afternoon foursomes to trim the deficit to 10-8 heading into the final day at Royal Melbourne.

There were angry scenes earlier in the day when Patrick Reed’s caddie clashed with a spectator after the US golfer, heckled for three straight days for his waste bunker penalty in the Bahamas, was beaten in the morning fourballs with Webb Simpson, their third successive defeat in the Cup.

The PGA Tour said it was investigating the incident.

After the Internationals had extended their lead to four points in the morning fourballs, Tiger Woods’s team dug themselves out of a hole by winning two of the four foursomes matches and halving the others to defy huge crowds that grew increasingly hostile as the home side made a late rally.

The Americans were solid without their playing captain swinging a club on Saturday, with Woods electing to sit himself out for both the sessions.

With 12 singles matches remaining on Sunday the first team to reach 15.5 points will raise the trophy.

Dustin Johnson and Gary Woodland led the way in the first foursomes with a 2&1 victory over the Internationals’ most senior pairing of Louis Oosthuizen and Adam Scott.

Xander Schauffele and Patrick Cantlay then reduced the US deficit to two points with another 2&1 win over Cameron Smith and Im Sung-jae.

The margin would have been shaved to a single point but for a dramatic collapse by Justin Thomas and Rickie Fowler, who blew a five-hole lead after the 10th against Marc Leishman and Abraham Ancer and ended up with a half.

Under pressure after bogeys at 16 and 17, Thomas pulled his tee-shot on the last deep into the trees and Leishman pounced with a fine approach that landed within seven feet of the pin.

“I think (I’m) speechless. It’s unacceptable for us to get a half a point,” said a crestfallen Thomas.

“We had our chances, and I mean, flat honest, just didn’t execute. I’m just disappointed in myself for burning that for us on 18.”

International rookies Joaquin Niemann and An Byeong-hun fought back from two holes down in the tense final match to share a point with Matt Kuchar and Tony Finau.

With the duel going down to the wire, Chilean Niemann produced a brilliant recovery from the rough on 18 to give An a birdie chance from within seven feet to claim a full point.

A massive greenside gallery groaned as An’s putt burned the rim of the cup and refused to drop.

The Internationals had claimed the morning fourballs 2.5 - 1.5, with Thomas and Fowler the only Americans pairing to win a full point.