Justin Thomas tees off in Hawaii with high hopes for 2020

American is a previous winner of Sentry Tournament of Champions 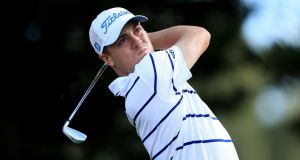 Justin Thomas in practice ahead of the Sentry Tournament of Champions. Photograph: Sam Greenwood/Getty

Justin Thomas will tee off at the Sentry Tournament of Champions this week hoping it can once again prove a kick-start to a strong year.

Thomas won this tournament in 2017 and proved something of a Hawaii specialist by backing it up with victory a week later at the Sony Open, the first two wins of his most successful season yet, which was capped by his US PGA Championship win in the August.

Wrist injuries have slowed him since, but he returns to the Plantation Course at Kapalua this week after his win in the BMW Championship in August — his first victory in a full calendar year, and one that was followed by success in the CJ Cup two months later.

Those are wins Thomas hopes are markers on the road back to his best.

“I wouldn’t say anybody slept on me last year,” Thomas said. “I didn’t play very well to start the year, and I hadn’t won at all, and I dropped five to ten in the World Rankings, so there’s a lot of people that were playing better than me and winning more tournaments.

“I could have had a pity party and asked for more attention but I definitely didn’t deserve anything special.

“I hadn’t done what I had the year before and definitely not two years before that. But I felt like I was playing just as well, I just didn’t have the results.

“Even with the injury happening, I tried to stay patient, and I was glad to see it kind of come back to how it felt like it should have been at the end of the year.”

Xander Schauffele returns as the defending champion following his dramatic final round of 62 last year, while Jon Rahm, the world number three, is the highest-ranked player in the field.

Dustin Johnson — a two-time winner of the event — is making his first start of the 2019-20 season.

Manchester City see off West Ham without needing to leave first gear 22:49
Rashford ‘touch and go’ to play again this season – Solskjær 22:30
Limerick advance to Munster U20 football semi-final after beating Tipperary 21:20
Willie Mullins manoeuvring his Cheltenham forces into position 19:30
Laurina finishes third behind Elfile in Punchestown mares’ hurdle 19:15
Here is your handy guide to sport on television this week