Son of president’s personal lawyer earns over $90,000 a year in the White House 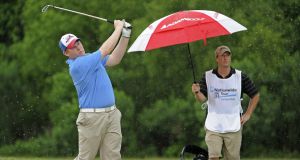 Andrew Giuliani hits from a bunker on the 13th hole during the first round of the South Georgia Classic Presented by First State Bank and Trust Company at Kinderlou Forest Golf Club in Valdosta, Georgia. Photo: Chris Condon/PGA TOUR

The scene was Trump National Golf Club in Northern Virginia on a summer’s day in 2017. The foursome consisted of the rules-averse golfer now known as the commander-in-cheat, legendary NFL quarterback Peyton Manning, Senator Bob Corker from Tennessee, and Andrew Giuliani, son of former New York City Mayor, Rudy. At one point in the round, Giuliani fired a chip shot towards the green that veered offline and hit Corker right in the neck.

“Thank God you didn’t do that to me, or you’d have had two in the chest from these guys!” said Trump, pointing towards his security detail.

Nobody is quite sure how much Giuliani the younger earns from a job at the White House where his duties often involve teeing it up with his boss. Some reports claim it’s $90,000 per year. Others reckon it’s $97,000. The confusion is perhaps inevitable because nobody is quite sure exactly what else he does for the money. Sometimes described as a special assistant to Trump, the oft-used title of sports liaison officer supposedly gives him responsibility for scheduling the visits of championship-winning clubs to his boss. Since just 11 teams have turned up for that honour in the past three years, hardly the most onerous task.

Of course, Giuliani wouldn’t be the only person knocking around the nepotistic Trump administration with a vague job description and dubious qualifications beyond a very distinctive surname. His particular case, however, is complicated by the fact his father is also the president’s personal attorney and long-time friend. Which is why most people assume this particular sinecure was created early in 2017 to give him some faux responsibility, a handy salary and, at 29, his first full-time job, aside from a brief internship at an investment bank and a stint volunteering on Trump’s election campaign.

Giuliani has been in the public eye since 1994 when, as a precocious seven-year-old, he stood next to his father while he made his inaugural address as mayor. As Rudy laid out his plans for cleaning up the city and remaking it as capital of the world, Andrew hammed it up on the podium beside him, blowing kisses to the cameras, mimicking his dad’s every hand gesture and even shouting out random declarations like, “It should be so and it will be so!”

Seven years later, the child was in the spotlight again when he got to play alongside Tiger Woods, then in the middle of a historic run of 20 wins from 41 starts, in the Buick Classic pro-am at Westchester Country Club. On the way to shooting a very respectable 85, he chipped in for par on the second, and, like any teenager hanging with his golfing hero, asked Woods for permission to do his trademark fist pump in celebration. After high school, Giuliani made the golf team at Duke University, the logical next step for a promising player with aspirations of making it to the PGA Tour.

That’s where it all started to go wrong. Having failed to impact on the course, he was thrown off the team in 2008 for breaches of discipline that included breaking clubs, disrespecting a trainer and throwing an apple at a teammate. At one point, five of the other Duke squad wrote a letter asking him not to come back. Giuliani reacted in a classically Trumpian way, suing the college for damaging his professional prospects and alleging he was persecuted in a manner akin to William Golding’s Lord of the Flies.

After two different judges threw out the case, he spent the rest of his 20s pursuing his sporting dream via minor league tours and a Golf Channel reality show. No shame in that but it’s an odd sort of résumé for somebody who White House sources now say represents the public liaison office at Oval Office meetings about the opioid crisis. Since the Trump administration is notorious for appointing people with no skill set or experience to crucial positions (witness failed newspaper publisher Jared Kushner charged with solving the Middle East crisis), having a failed golf pro at the table when discussing the most grave public health issue facing the nation totally adds up.

At one point last year, then White House Chief of Staff John Kelly revoked the privileges that allowed Giuliani, for reasons nobody can quite figure out, unfettered access to the West Wing. Kelly soon discovered the limits of his own authority when the coveted blue badge was quickly restored to Rudy’s boy. Even now, as Giuliani the elder has morphed into an increasingly unhinged peddler of conspiracy theories about Ukraine, a blabbermouth who often brings more legal trouble to his client’s door, his son is still regarded as an untouchable in the president’s inner circle.

The search for explanations as to why leads inevitably to the golf course. While Rick Reilly wrote an excellent book detailing how Trump cheats nearly every time he picks up a club, his most regular playing partner offers a contrary view.

“I can’t tell you how many times I’ve been finishing lunch at Bedminster [Trump National Golf Club in New Jersey],” said Giuliani junior, “and someone who just finished their first time playing with him comes up and says, ‘I can’t believe he’s that good. I thought he was going to shoot 100 and he ended up shooting like 72.’”

It should be so. It will be so.

1 Saracens to accept second 35-point deduction and effective relegation
2 How do Klopp’s Liverpool measure up against greats of past?
3 Welcome to Iten in Kenya – home of champions and cheats
4 TJ Reid reveals the fresh secrets of his consistency
5 Sonia O’Sullivan: How did Melbourne become the world’s most polluted city?
Real news has value SUBSCRIBE